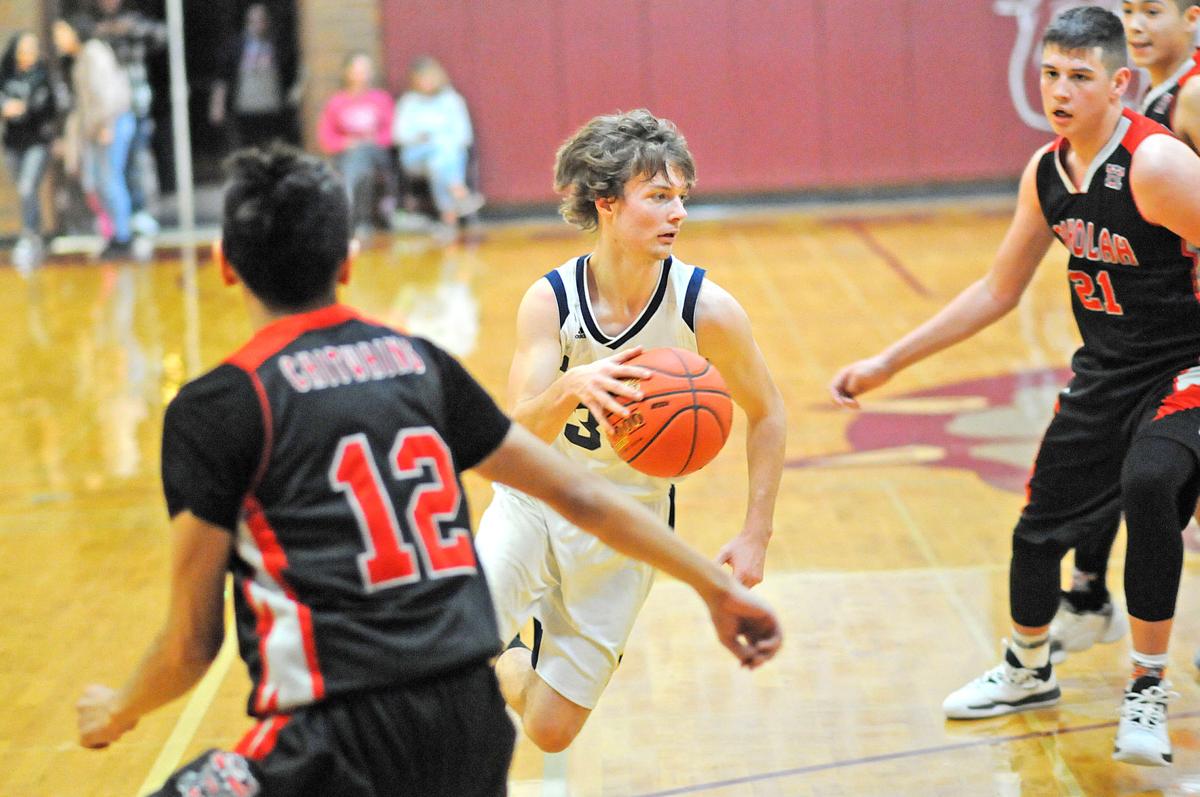 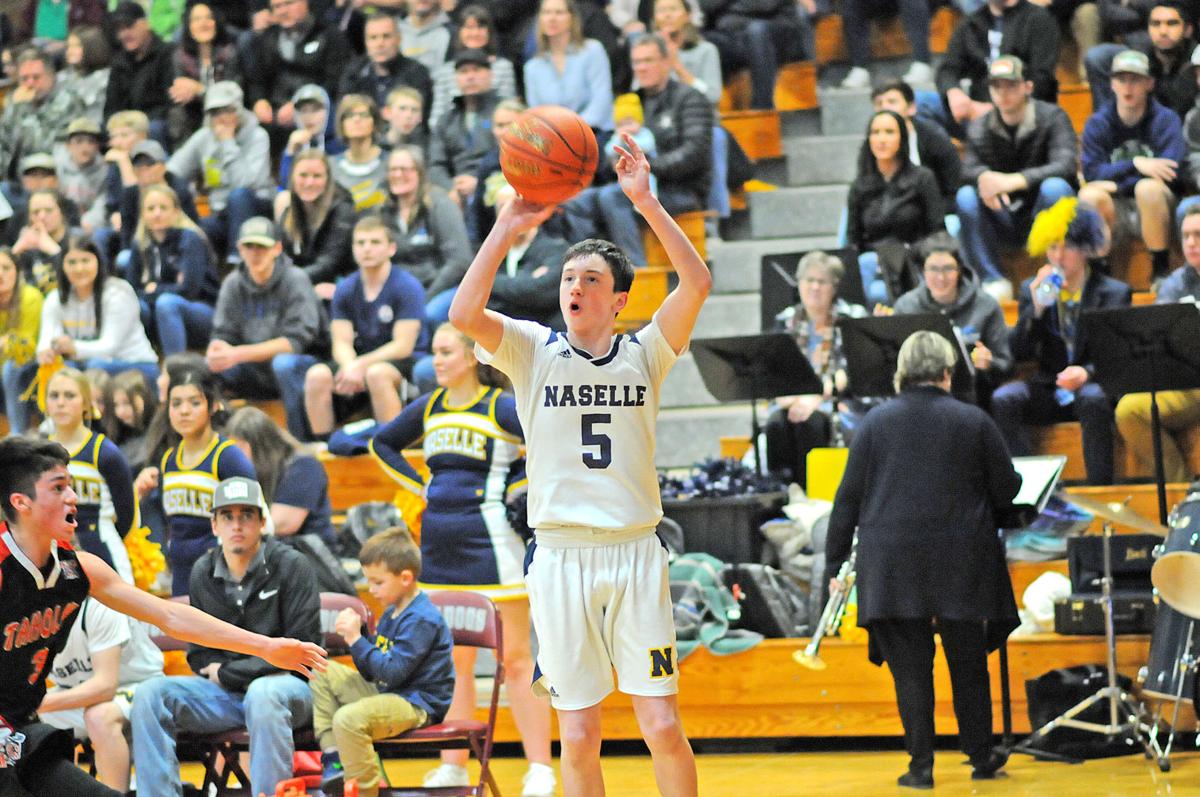 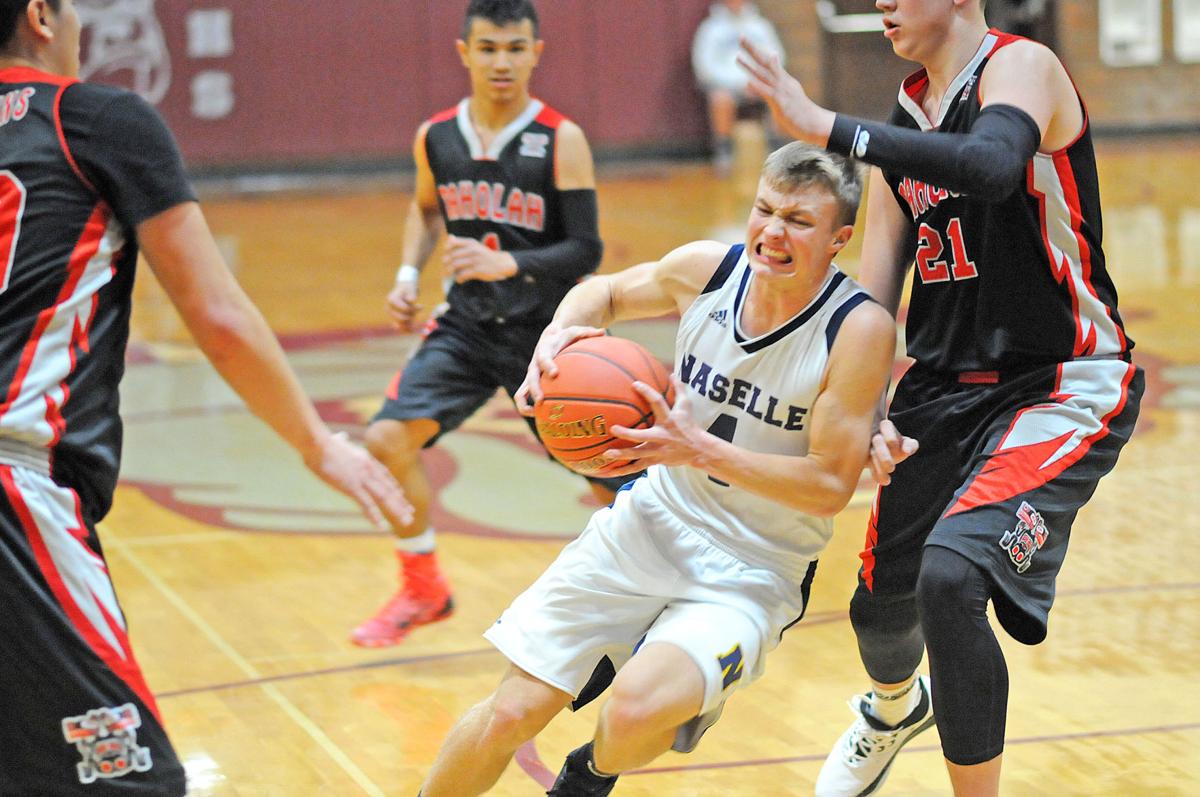 MONTESANO — Izaiah Mowitch dominated near the basket, scoring 34 points in Taholah’s 58-53 district finals victory over Naselle Thursday, Feb. 20. Naselle came back from a double-digit deficit to take a late lead, but Mowitch closed out the contest with the final seven points.

Taholah jumped out to a 13-0 early lead with five different players scoring during the stretch. Naselle improved on both ends of the court after that, but Taholah repeatedly got the ball to Mowitch in the paint and kept the lead in the 12-14 point range most of the way.

“He’s got a size edge on us, and he just squared up to the basket,” Naselle coach Bill Olsen said. “He had a career game today. He wasn’t really the guy on their team we were watching out for.”

Kolby Glenn cut the lead to 43-35 with a four-point play with 26.8 seconds in the third quarter. Early in the fourth, Glenn found himself guarding Mowitch in the high post, hid behind him, then darted around him to steal the pass from the corner. Glenn got fouled on the break, hitting both free throws to cut it to 47-43 with 6:19 to play.

Naselle switched to a three-quarter-court press, causing a throw-away. Glenn found Lindstrom open in the corner, where he nailed a three that cut it to one. Taholah continued struggling with the three-quarters press, and Naselle kept finding an open corner against the Taholah 1-3-1 zone. Glenn’s three tied it at 49, and Gregory’s three gave the Comets a 52-49 lead with 3:55 left.

But Mowitch scored on a cross-key pass to tie it at 53, then did it again to give Taholah the lead with 1:23 left. Comet shooting had now gone cold, with misses on the same open looks from the corner that had given them the lead.

“We had two open shots rattle out,” Olsen said.

Chase Haataia took a charge from Mowitch right under the basket to get Naselle another chance with 52.1 seconds remaining, but the Comets missed two more threes on the resulting possession. Glenn and Corey Gregory trapped Tommy Underwood, and Gregory took the ball away but was called for a dubious reach-in foul. On the sideline-inbound, Mowitch came open, took a pass from Deven James and turned it into a three-point play, clinching the game with 25.3 seconds left.

Taholah advanced to regionals, where they will face Mount Vernon Christian as the ninth seed. The loss sent Naselle to the second-place district game.