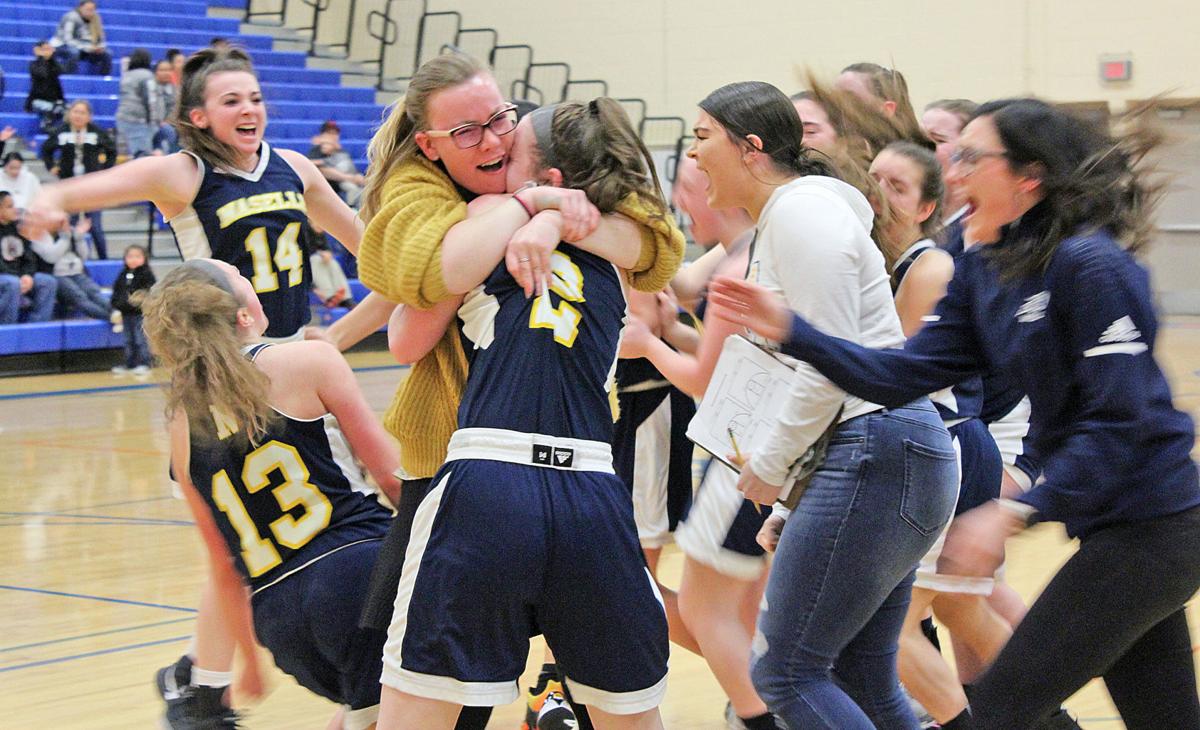 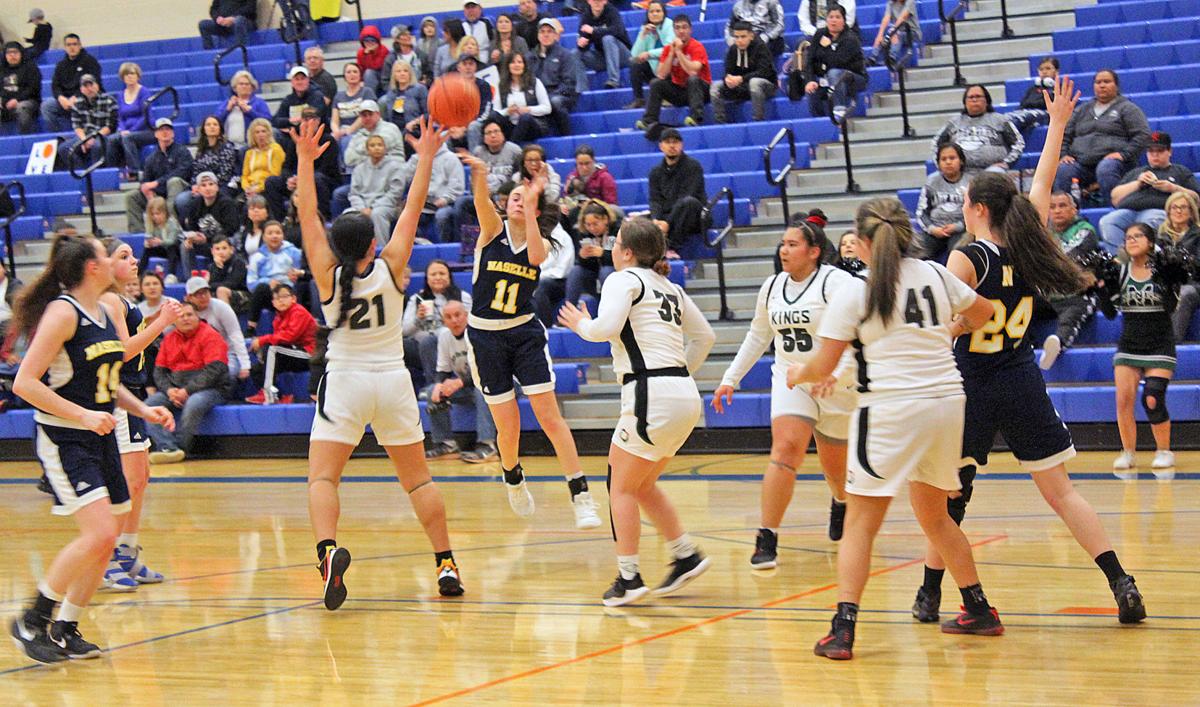 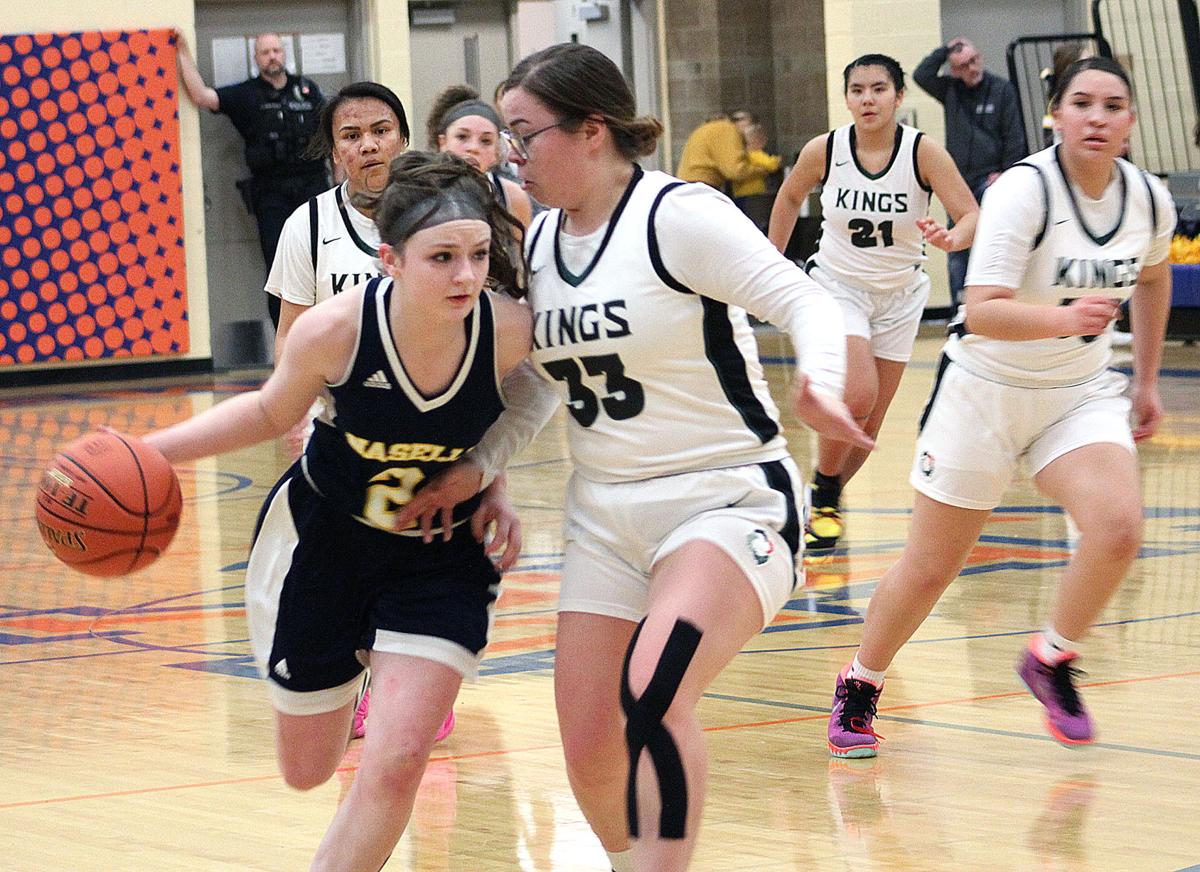 Naselle sophomore Peyton Dalton looks for a way past Muckleshoot’s Kalea Lezard during action Friday. Dalton worked hard throughout but Lezard proved adept at stealing the ball from Comet players and setting up counterattacks which caused the game to become close in the last quarter.

Naselle sophomore Peyton Dalton looks for a way past Muckleshoot’s Kalea Lezard during action Friday. Dalton worked hard throughout but Lezard proved adept at stealing the ball from Comet players and setting up counterattacks which caused the game to become close in the last quarter.

AUBURN — Bella Colombo’s three-pointer with under three minutes to go put Naselle ahead for good on the way to a 43-39 Regionals victory over Muckleshoot Tribal Friday, Feb. 28. The win sends the Lady Comets to the State tournament for the second straight year.

Muckleshoot tried to tie it on their final possession, but Jackie Steenerson batted away a high-low pass. Colombo caught the outlet and made a contested layup with five seconds to go to secure the 43-39 victory, capping Colombo’s 13-point night.

But Naselle jumped out in front against the Kings. Colombo followed a Jackie Steenerson basket with a steal at half-court and layup for a 4-0 lead. Lauren Katyryniuk threw a baseline inbounds pass, then nonchalantly sneaked open behind the Muckleshoot zone and hit a three-pointer for a 17-11 lead after a quarter.

The Kings came out with six players on the court in the second quarter, leading to a technical, and were out of sorts throughout the period. Katyryniuk poked the ball away on a full-court press and scored on Colombo’s pass for a 28-13 lead with 1:11 to go in the half.

The lead began to slip toward the end of the half as Naselle’s press showed cracks and Muckleshoot got through for lay-ups. Cecilia Reyas then hit a three right out of halftime. At the end of the third quarter, the Kings got a three-pointer, steal and layup to cut the lead to 33-30.

In the fourth, Muckleshoot again opened the period with a three-pointer, this time by Resa Starr to tie it 33. Muckleshoot took its first lead of the game at 36-35 on a steal-and-score in the full-court press with 5:20 to go. A pair of free throws with 4:41 left capped a 25-7 run, giving Muckleshoot a 38-35 lead.

Final MinutesWith Muckleshoot holding a 39-38 lead and pushing down-court in transition, Kaylin Shrives intercepted a pass to the middle. At the other end, Colombo nailed her go-ahead three-pointer for the 41-39 lead with 2:25 left.

With under a minute to go, Leila Sam stole the ball from Colombo, who tracked her down and knocked it out of bounds to stop the break. Muckleshoot could not connect on the resulting baseline-inbounds, leading to an over-and-back. Colombo then threw the ball away while trapped at half-court, but Peyton Dalton walled off Sam to again stop the break.

Muckleshoot still had a final chance to tie it on a baseline in-bounds play with 17 seconds to go. But Steenerson deflected the pass to the low-post, gathered the loose ball, and found Colombo sprinting down-court. Colombo went airborne for the lay-up with three seconds remaining to punctuate the win.

The victory sends Naselle to the State tournament in Spokane for the second straight year. The Lady Comets will play either Curlew or Inchelium in the first round Wednesday, March 4 at 5:30 p.m.