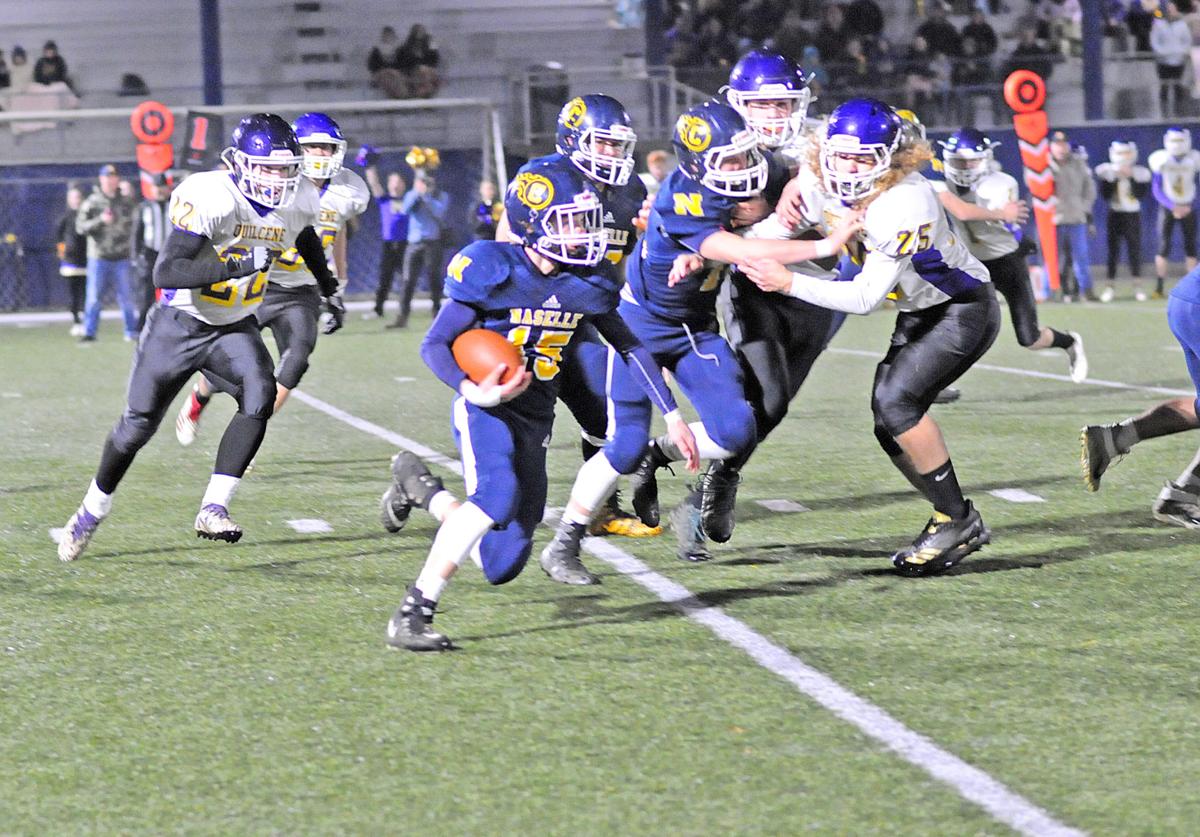 Joey Strange gets a block and runs to the outside. 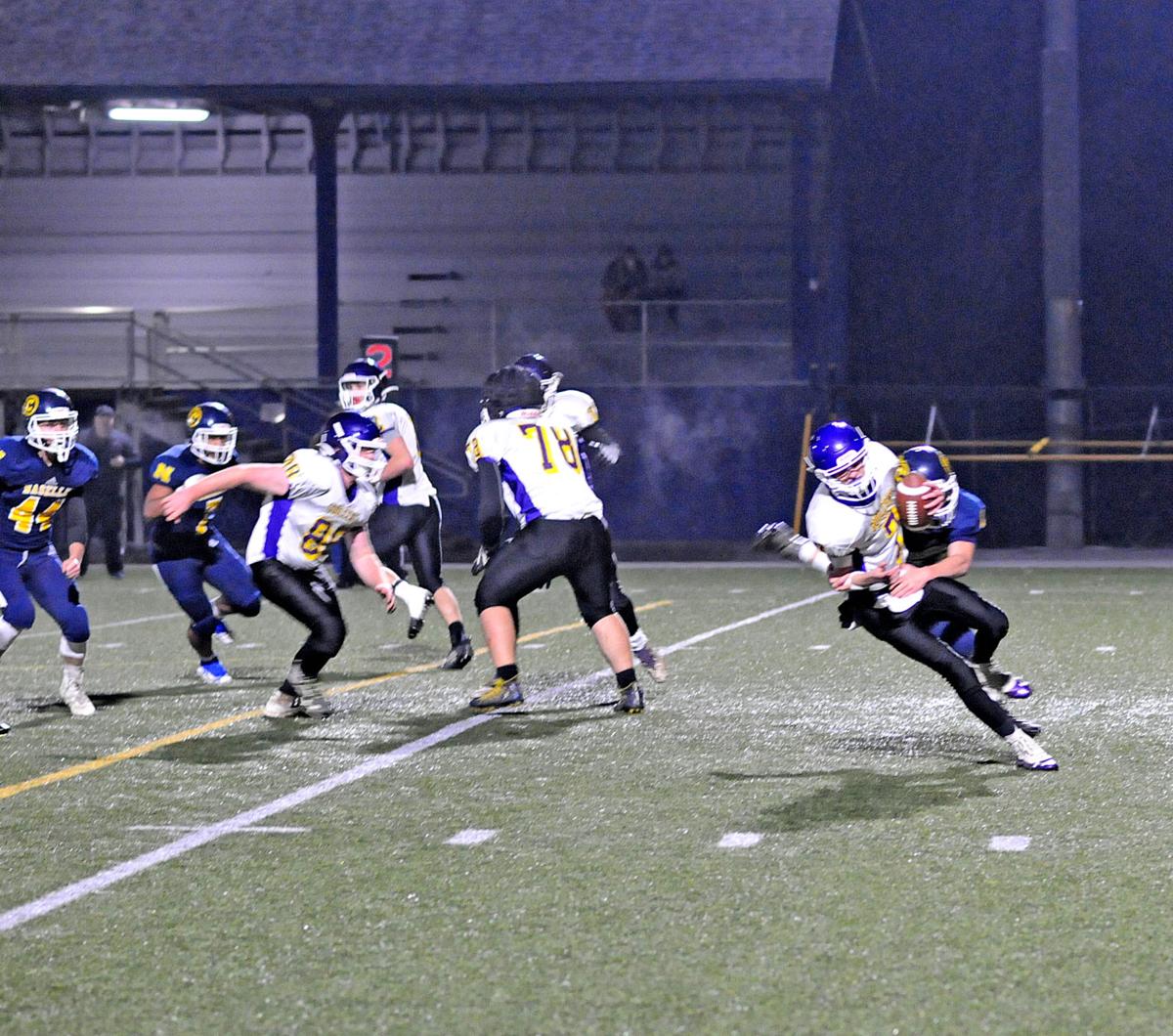 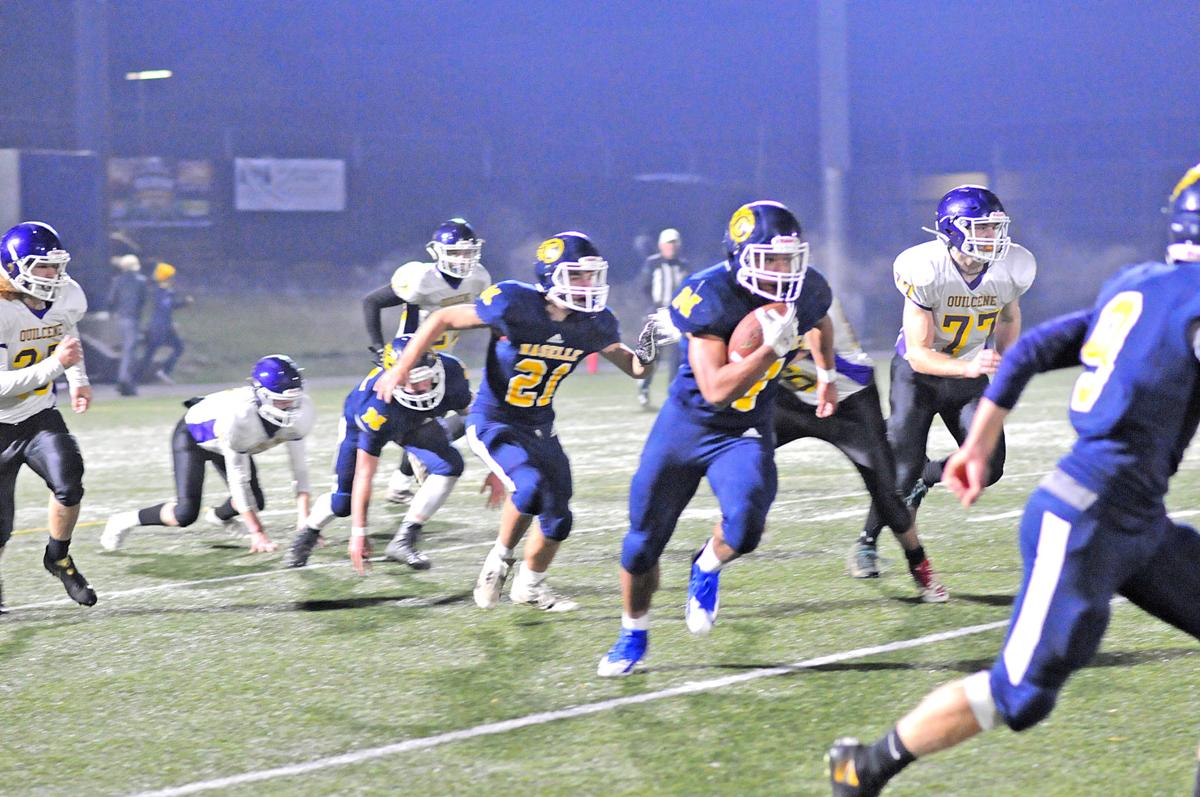 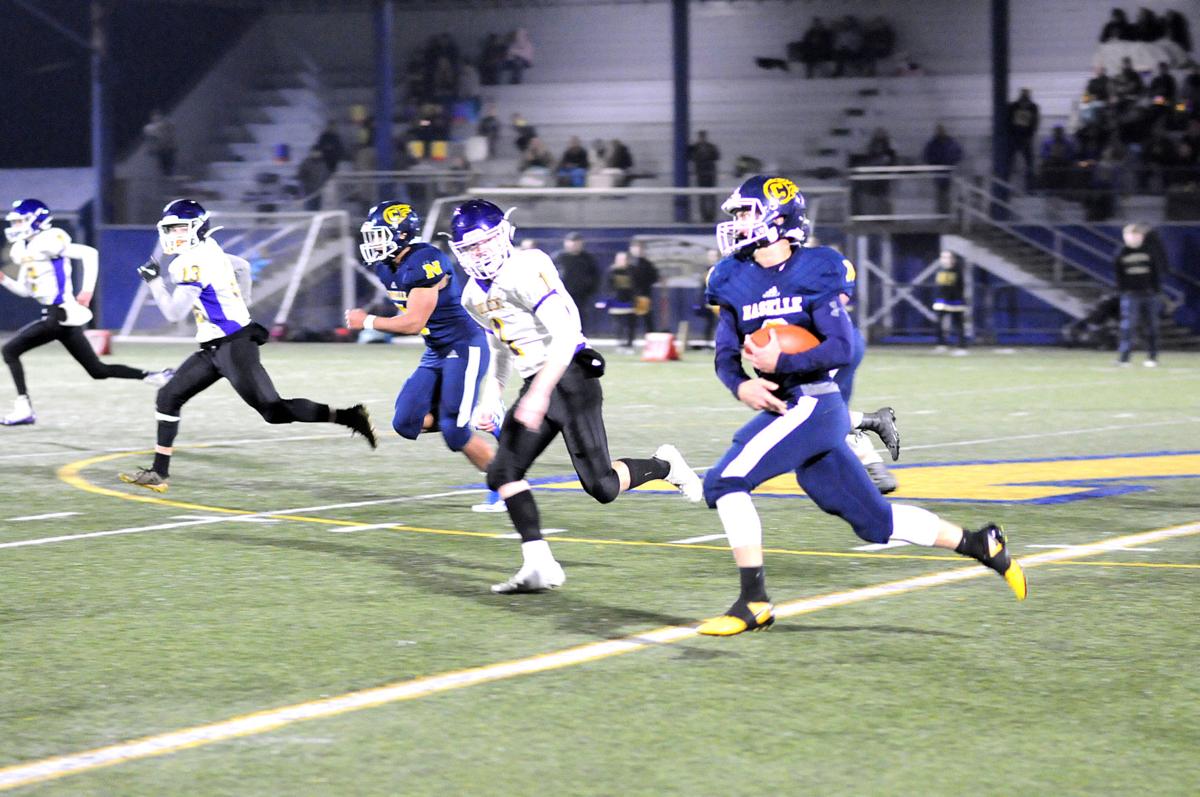 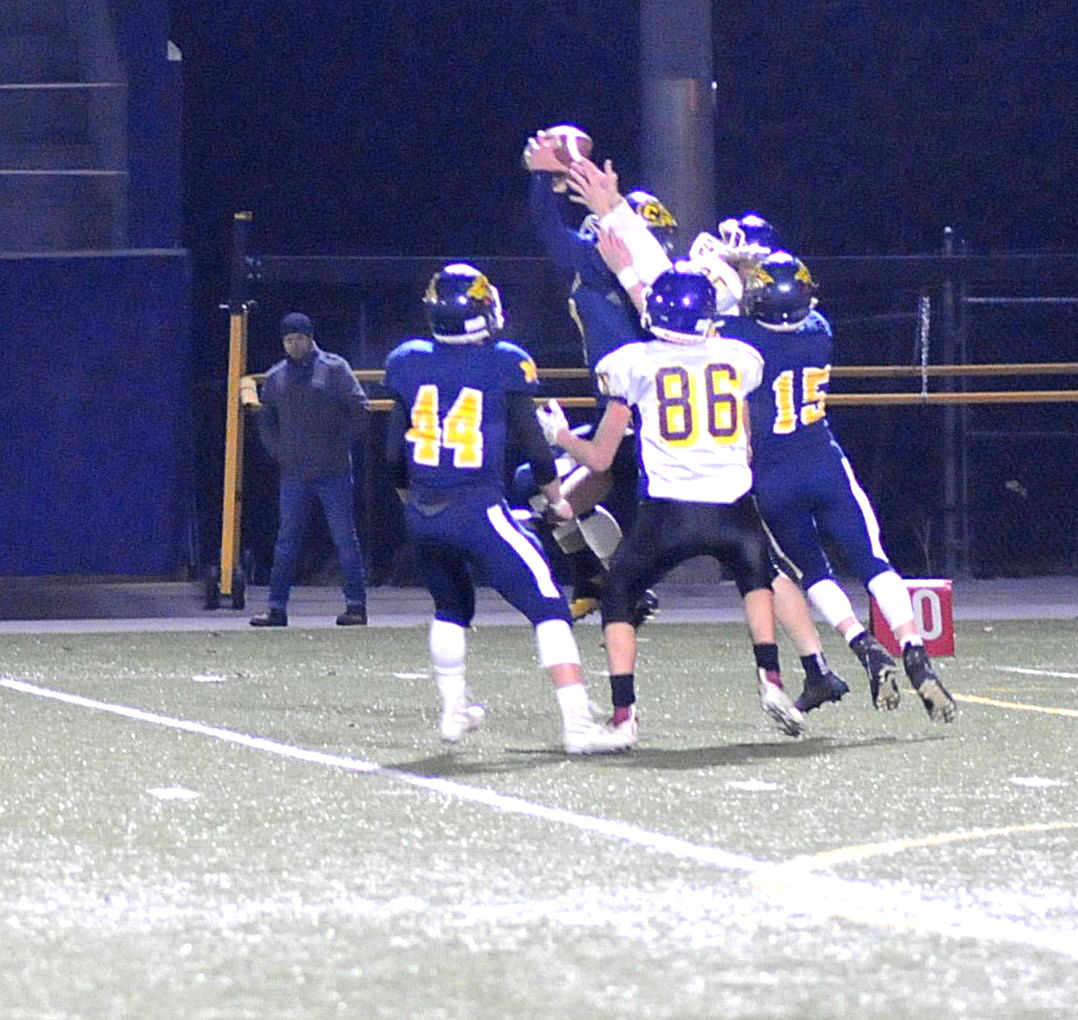 Ethan Lindstrom intercepts a pass at the end of the first half. Jimmy Strange (44) and Joe Strange (15) were also in coverage. 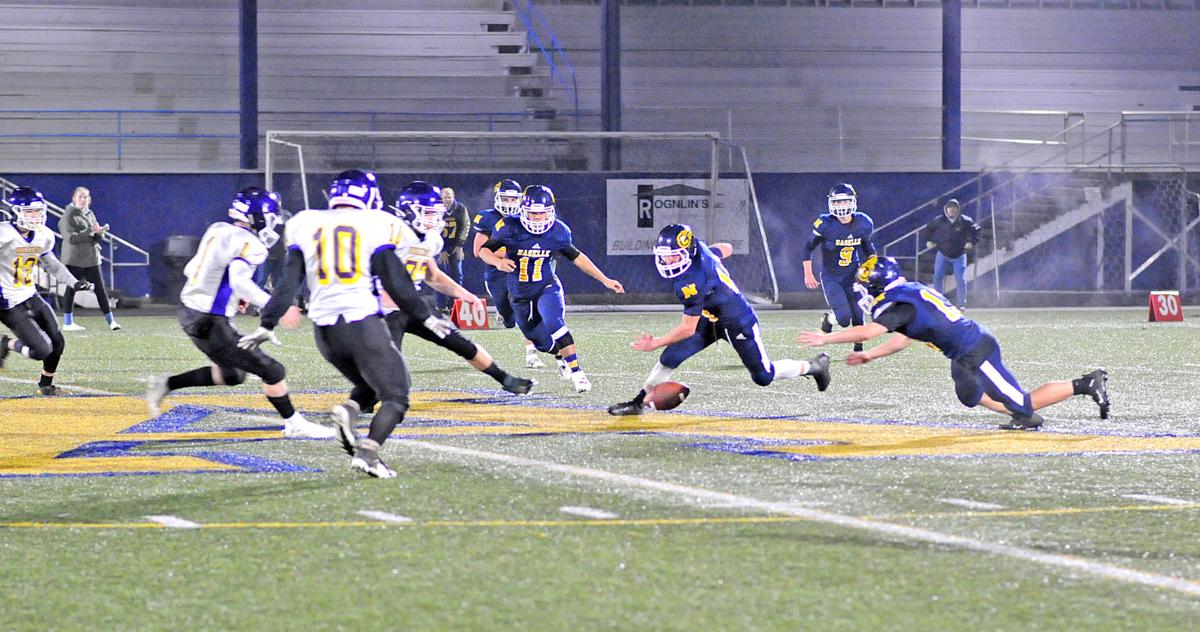 Daniel Holt (far right) dives for a Quilcene onside kick. He recovered the kick with 2:17 left, allowing the Comets to milk the clock.

Joey Strange gets a block and runs to the outside.

Ethan Lindstrom intercepts a pass at the end of the first half. Jimmy Strange (44) and Joe Strange (15) were also in coverage.

Daniel Holt (far right) dives for a Quilcene onside kick. He recovered the kick with 2:17 left, allowing the Comets to milk the clock.

ABERDEEN — Bishop Budnek churned out first down after first down as Quilcene pursued an upset, but the Comets withstood their biggest challenge of the season for a 50-46 quarterfinal victory Friday Nov. 22.

The Comets piled up points with a downfield passing attack that supplemented a strong running game, but Quilcene cut a 20-point deficit to four with 2:17 left. An onside kick recovery by Daniel Holt and a third-and-seven pickup by Ethan Lindstrom allowed Naselle to run out the clock and preserve a 50-46 victory.

Budnek (29 carries, 360 yards), running behind a big offensive line, carried the seventh-seeded Rangers to the near-upset. He scored 38 points on four rushing touchdowns, a receiving TD and four two-point conversions. Naselle also dominated on offense, getting big plays running and passing. Ethan Lindstrom went eight for 10 with 147 yards and two touchdowns passing, and ran for 189 yards and three touchdowns on 15 carries, while Fa’aoso Tutu’u ran for 97 yards on 12 carries.

“They’re a bigger team, and they ran a different scheme,” Lindstrom said.

“They pushed us around on the line even if I put five guys out there,” Naselle Coach Jeff Eaton said. “Then when I did, sometimes they’d sneak somebody out for a pass. We have to figure out a way to deal with teams that are bigger on the line.”

“We weren’t used to that kind of blocking. They had two guards pulling the defensive tackle,” said Strange, who made six tackles, including several touchdown-saving open-field tackles, as a defensive back.

With both teams scoring on most possessions, the Comets turned to Lindstrom’s onside kicking genius to create separation. Following Fa’aoso Tutu’u’s 97-yard kickoff return for a touchdown that put the Comets ahead 22-16, Lindstrom kicked a grounder up the middle and got it himself, outwrestling a Ranger player for the ball.

Lindstrom hit Tutu’u for a 45-yard touchdown on the next play. Then he trickled another onside kick through the front line, and Kolten Lindstrom recovered. A 29-yard outside run by Tutu’u on fourth-and-ten kept the ensuing drive alive. Lindstrom finished the drive off with 32-yard TD pass to Warren Wirkkala, extending the lead to 34-16. At halftime, Naselle led 42-22.

Apart from the last drive of the half, which ended with Lindstrom intercepting a deep pass with just three seconds left, Naselle got only one defensive stop in the first half. That came when Kolten Lindstrom got a sack to force third-and-23, leading to a Ranger punt. Joey Strange blocked the punt, setting up Naselle at the two-yard line, where Ethan ran it in for an early 14-8 lead.

In the second half, both defenses had some success.

Strange fumbled the ball on the opening drive, then intercepted it right back on the next play. Naselle had its subsequent drive fizzle out inside the 20-yard line, but then answered a Quilcene TD with a 10-play, 91-yard touchdown drive. Tutu’u kept the drive going with a 22-yard catch on third-and-nine, then finished it off with a nine-yard run. Lindstrom’s two-point conversion run made it 50-30 near the end of the third quarter.

Budnek carried five times in seven plays on a touchdown drive that cut the lead back to 12 with 9:08 left.

Wirkkala recovered the onside kick, but Quilcene took over on downs after nearly intercepting a desperate fourth-down pass by Lindstrom with 7:24 left. Strange in turn broke up Quilcene’s fourth-down pass to give the ball back to the Comets. A bad snap and a holding penalty resulted in the Comets turning it back over on downs. Quilcene took over at its own 17, still trailing 50-38 with 4:30 left.

Budnek had runs of 31 and 35 yards on the subsequent touchdown drive, on which he scored from nine yards out and added the two-pointer to make it 50-46 with 2:17 remaining.

Kolten Lindstrom fumbled the ensuing onside kick, the ball bouncing off his hands back in the direction of the kickoff team. But with the season in the balance, Daniel Holt jumped forward and pounced on the ball.

Quilcene’s defense continued making plays. As Lindstrom took off up the middle, Kevin Alejos’ tackle held him to a four-yard gain. The Rangers then stuffed an option play with Strange and Lindstrom running together to the right. Quilcene called timeout after both these plays, setting up third and seven with 2:00 still to play.

Out of the timeout, Lindstrom faked a pitch to Tutu’u and found a big opening, running 20 yards for a first down, virtually clinching the game as Naselle ran the clock down to 1:24. Quilcene used its final timeout at the 1:17 mark, but Tutu’u ran 14 yards for a first down on a second-down pitch play, allowing the Comets to go into victory formation and close out the win.

The victory pits two-seed Naselle (12-0) against the three-seed Almira-Coulee-Hartline Warriors (11-1) at Tumwater High School Saturday, Nov. 30 at 1:00 p.m. for a rematch of last year’s semifinal. The Warriors won that game 82-28 behind an 11-for-11, 391 yard performance by senior quarterback Maguire Isaak, who averaged a mind-boggling 19.4 yards per pass attempt his senior season. This year’s quarterback, Dane Isaak, is passing just half as frequently as Maguire did, but is a highly efficient 35 of 49 for 649 yards, or 13.2 yards per attempt. A-C-H averages 9.7 yards per rush attempt.

Almira’s only loss came 92-6 against Odessa, the defending State champion and the overwhelming favorite to repeat. The Warriors’ most impressive win was 74-36 against Entiat, another State semifinalist this year.

In Saturday’s other semifinal, Odessa will take on Entiat.