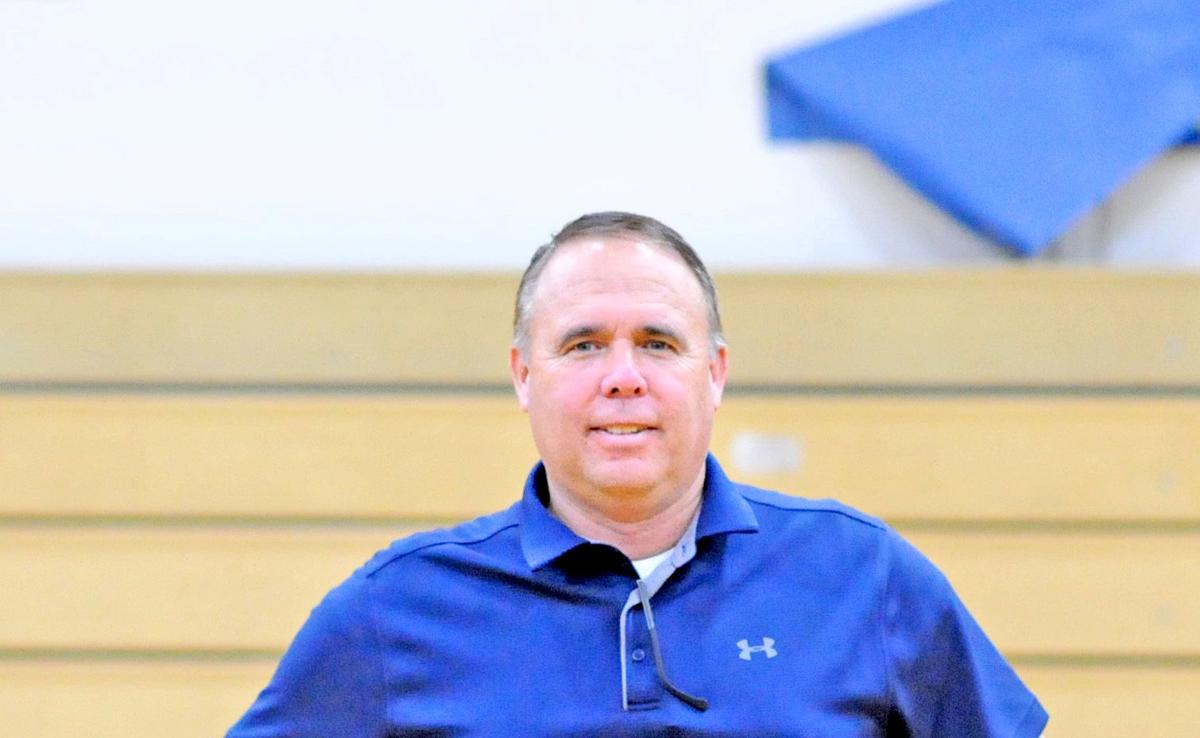 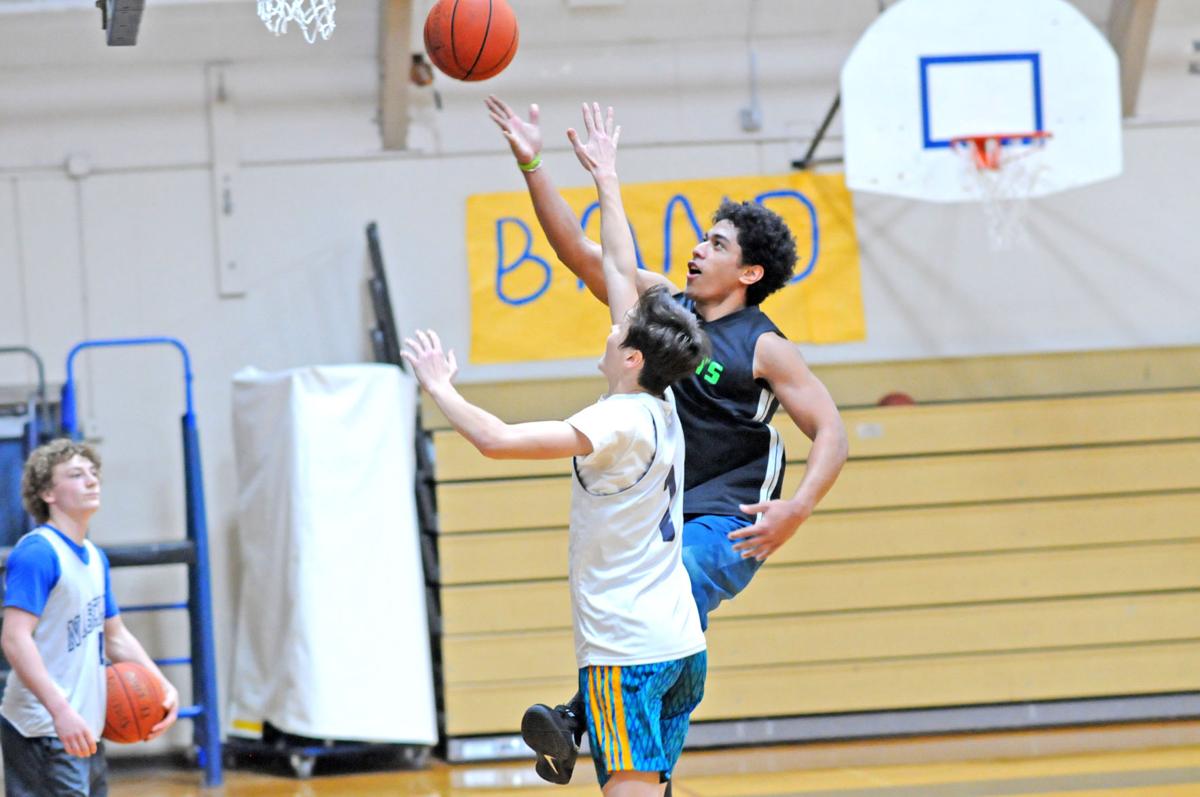 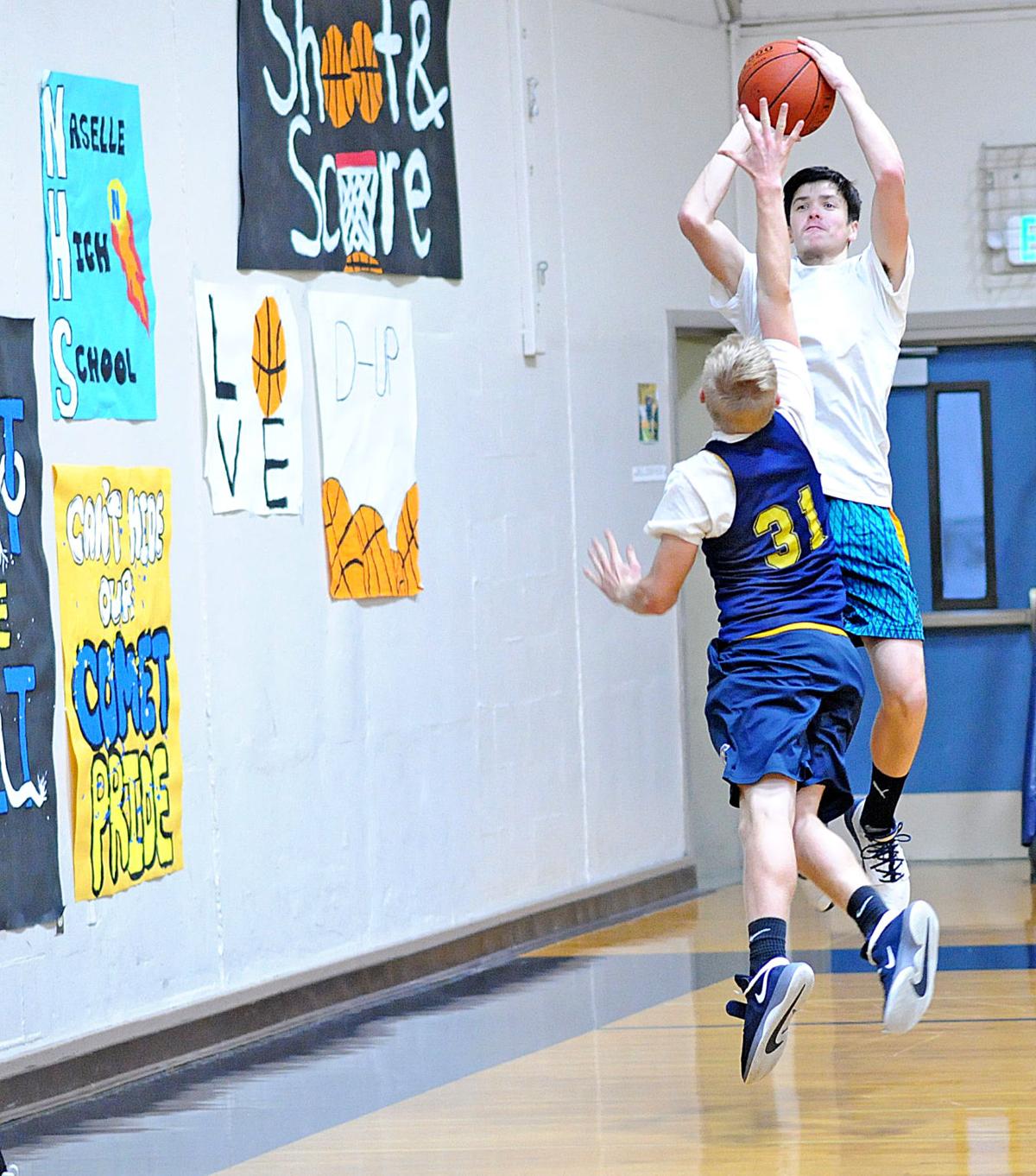 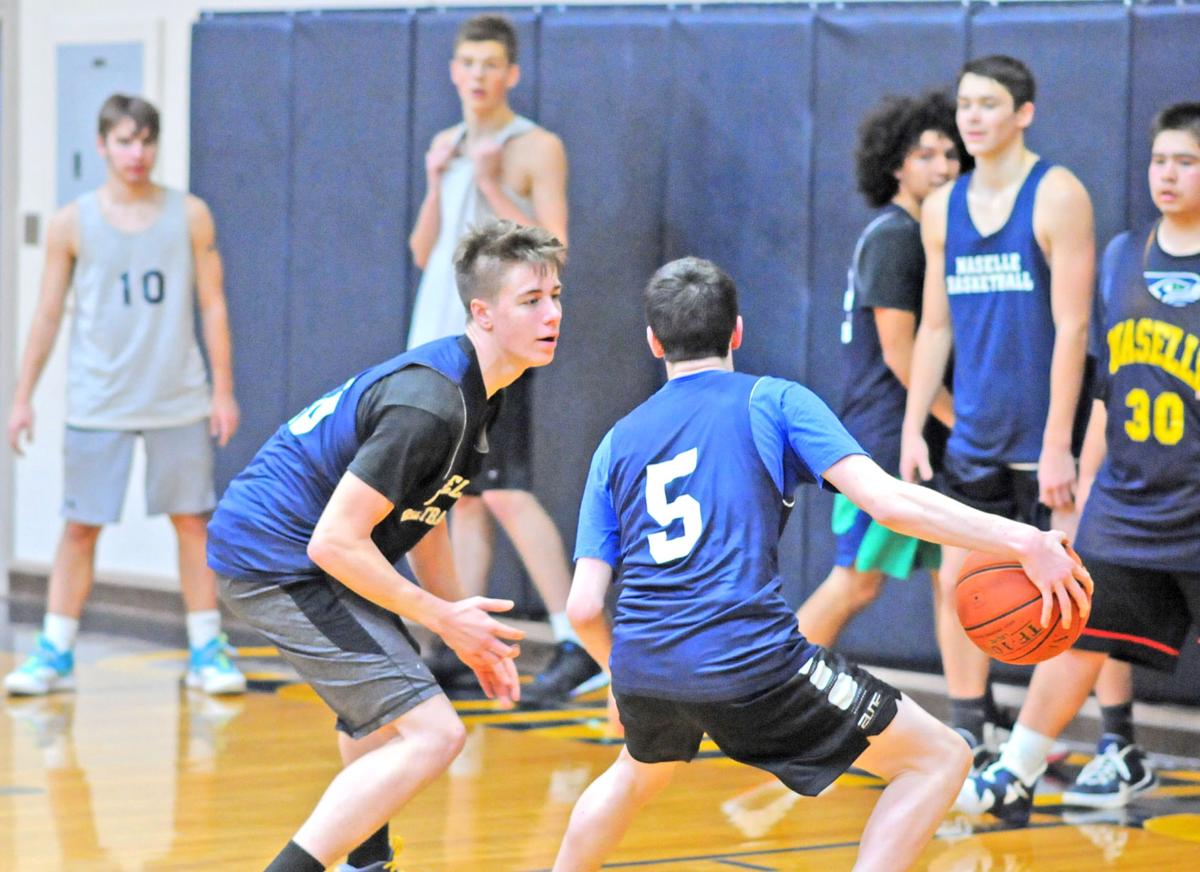 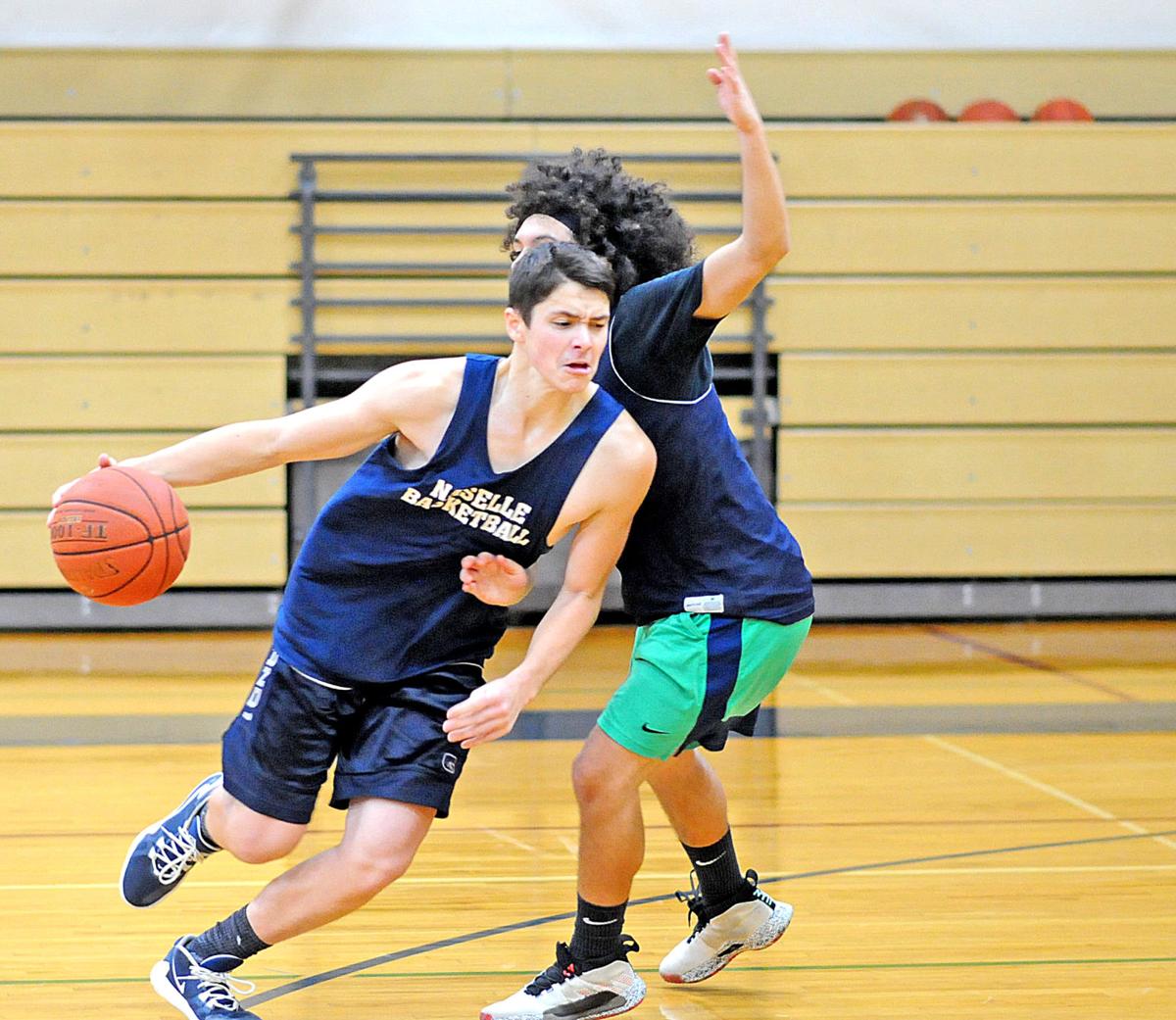 Chase Haataia drives against Oggie Lopez at a practice.

Chase Haataia drives against Oggie Lopez at a practice.

NASELLE — Bill Olsen knows he is inheriting a talented team. The Comets’ coach is taking over for Brian Macy, who guided the team to State the last two seasons and remains the athletic director but decided to move on from the burdens of coaching. Olsen himself made the same decision five years ago, walking away after 34 years as coach of Wahkiakum, the Comets’ ancient rival. But he was so reenergized that he found himself agreeing to the offer from Naselle High School this summer.

“Brian left the cupboard loaded,” Olsen said. “The quickness and athleticism is just immense on this team. It creates so much competition in practice.”

“One thing I’ve noticed about [Olsen] is he puts a lot of focus on small things, details…We start out with a lot of conditioning, and spend time going through plays,” point guard Kolby Glenn said.

Glenn is wily playmaker and an extremely dangerous high-volume three-point shooter. Whereas many three-point shooters are catch-and-shoot specialists who punish defenses for leaving them open, Glenn has shown he can get off his shot under duress in big moments. At State last year he created a three-pointer out of nothing. He faked a pass to the corner to create a sliver of space for a very brief moment, then used an ultra-quick release to nail the game-winner. In this year’s second game, against Wahkiakum, amid a playoff atmosphere in the rivalry game, Glenn again went against tenacious defense and created the opening he needed to hit the game-winner.

Glenn started his career playing varsity as a 5’5” freshman, already bringing a veteran’s swagger and savvy due to countless hours on the court. He got used to using crafty play to navigate through bigger defenders, and has retained his intense commitment to the game, playing on the AAU circuit. Now a 5’10” junior, Glenn rarely has that height disadvantage.

Ethan Lindstrom is probably the team’s top pure athlete, using his speed to drive and using his leaping ability and hang time to beat help defenders at the rim. Under Macy, Lindstrom often guarded the opponent’s star, and Olsen has already noted his defensive talent.

Joining them in the back-court is Jimmy Strange. He hit the winning three-pointer at Willapa Valley as a freshman, got into the rotation as a sophomore with his driving ability, and should continue rising this year. Olsen said he will likely split point-guard duties with Glenn.

Corey Gregory has an array of talents. He often protects the rim on defense as a springy, shot-blocking six-footer, while operating from the perimeter on offense. He is a dangerous streak shooter who can put up double-figures scoring in a quarter.

The Comets have long been a perimeter team. As the program rose in recent years, it relied on team-wide athleticism and sharp passing rather than size. But the graduated Jacob Eaton, the 6’3” center, provided balance with his combination of skilled post moves and defense-stretching 15-footers. League coaches recognized him as the Comets’, and the league’s, most valuable player each of the past two years.

The 6’1” Jack Ruch will get big minutes inside for the Comets. He brings a different style than Eaton’s but should replace his rebounding due to his physical style of play. Monte Schell is the tallest player on the roster at 6’5”. Olsen sees Warren Wirkkala as someone who can guard all five positions.

“Because of our physical make-up, we could have five guards,” he said. “But my system calls for two bigs, so Warren will end up playing that role. He’s just tougher than nails.”

Fa’aoso Tutu’u last played basketball as a sophomore, when he played junior varsity. Since then, he has become an ever-bigger star on the football field, growing into a terrifying speed-and-power combination. Now he’s returning to the hardwood, and has spent time at the post position in practice, but again begins the year on the junior varsity roster.

On the perimeter the Comets also have big graduation losses, including Antonio Nolan, but they had almost interchangeable depth there last year. Players like Strange can likely move up in the hierarchy a bit without the team missing a beat. Chase and Caleb Haataia played on a dominant JV team last year that matched the varsity squad’s fast-paced play, and Chase was a swing player with varsity. Both are on track for regular playing time; Chase played in crunch time against Wahkiakum. Freshman Kolten Lindstrom has an athletic track record already, making All-League with the football team this fall and as an eighth-grader with the baseball team last spring. He also excelled at middle-school basketball.

Under Macy in recent years the team played man defense with a heavy dose of full-court press. Olsen plans to mix man defense and a press with a 3-2 zone.

“A lot of times a 3-2 zone is a soft defense. Ours never is,” he told his team at practice.

Because the football team reached the championship game, the Comets did not have their full team practicing until days before the opener. But they are already 3-1 on the year, including a rivalry win over Olsen’s old Wahkiakum team.