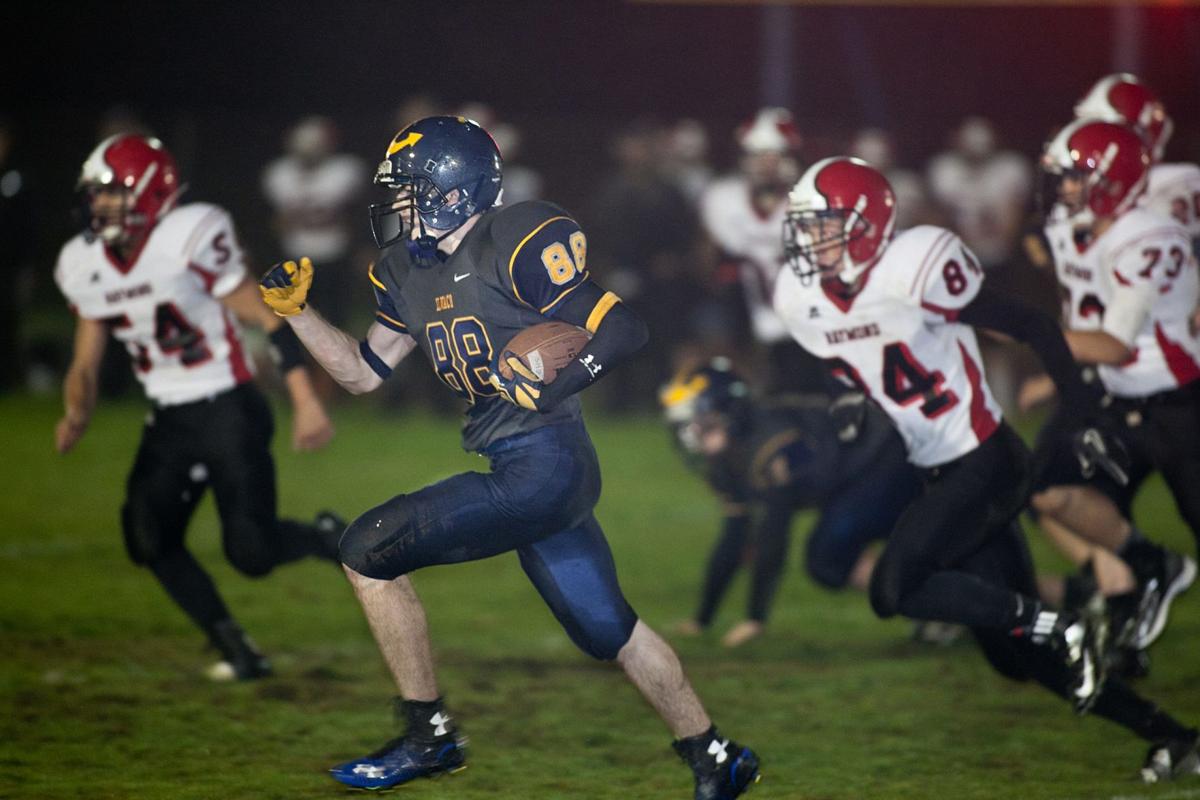 DAMIAN MULINIX/dmulinix@chinookobserver.com Jake Van Gelder sprints away from defenders on a 27-yard pass play in the fourth quarter of Friday's game. 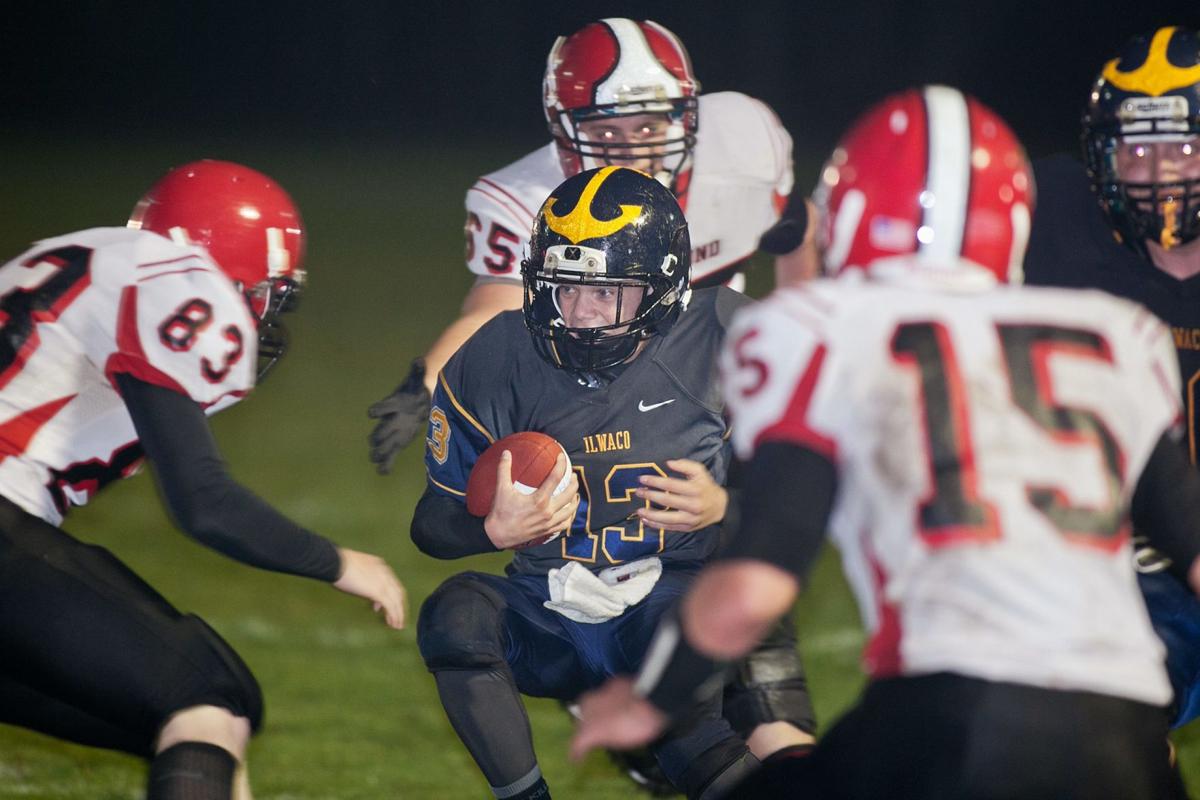 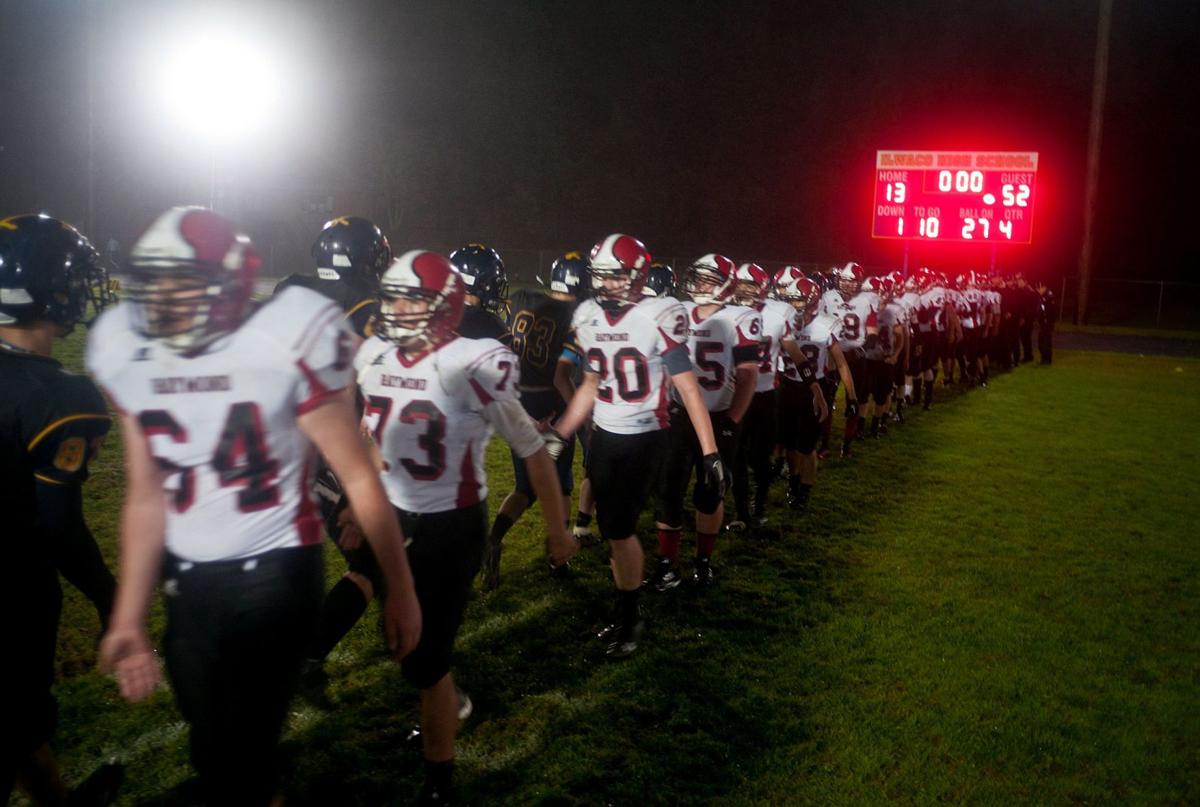 DAMIAN MULINIX/dmulinix@chinookobserver.com Jake Van Gelder sprints away from defenders on a 27-yard pass play in the fourth quarter of Friday's game.

ILWACO — The Fishermen felt all wet after last Friday night’s game. Partly because of the heavy misting rain that fell throughout the contest. But mostly because they were taken to task by the Raymond Seagulls, 52-13.

The Fishermen took a 6-0 lead on their opening drive by way of an Alec Bell touchdown catch, but couldn’t replicate that success until the final minutes of the game when Jonah Eagle-Bear scored on an 11-yard run.

“That first drive was probably as well as we’ve done, mixing it up, driving down and taking the lead ... and then we had some blunders,” said coach Kevin McNulty to the team after the game.

Raymond took the lead in the first quarter on a touchdown run and extra point kick. They went on to score seven more TDs before taking a 40-point lead, enacting the mercy rule running clock early in the fourth quarter.

“I think you know that score is not indicative of how good a football team we are,” said McNulty. “The nice thing about tonight is that we made all our blunders in one night. This was just not typical of what we’ve been doing this year. But if I could say let’s have it all in one night, tonight would be a better night to do it than next week, or the week after.”

Two of the Gull scores came from the defense, one on a 27-yard interception return and the other on a 27-yard fumble recovery.

“They’re fast, I’ll give them that. They’re a really fast athletic team, but I think a lot of the reason why we lost was a lot of mental mistakes and being inconsistent,” said Keegan Benenati after the game.

The Fishermen were held under 100 yards rushing for only the second time this season, picking up only 69 yards on 33 attempts — an average of only two yards per carry. In their previous six games Ilwaco had averaged 205 yards rushing. Meanwhile the Gulls rushed for 264 yards Friday.

The Fishermen were without their leading rusher Jack Kaino, who suffered a concussion during the previous game at Ocosta. Kaino, who leads the team with 708 rushing yards in six games, was replaced on the field by Eagle-Bear at running back, who picked up 24 yards on five carries. Kaino said he hopes to play in the next game.

“It just all depends on how I feel next week,” he said.

The Fishermen were also held to their lowest offensive output of the season, 153 total yards

Benenati said he thinks there are a number of areas the team will have to work on in practice this week.

“Sustaining our blocks, defensively not over-pursuing, getting in our gaps on the D line and just being more disciplined and consistent on both sides of the ball.”

“Next week is of huge importance. Next week is the most important game,” coach McNulty said of their upcoming game at Rainier.

With last weeks loss, the next two games will be key to the Fishermen’s hopes of making the playoffs.

Ilwaco remains tied for fourth place with Rainier after the Mountaineers lost to third place Life Christian 37-20 Friday. But with South Bend’s win over Chief Leschi, that team is only one game back in sixth place.

The winner of this week’s game will have sole possession of fourth place and be assured of a berth to the district crossover playoffs. The loser will be tied with South Bend — who have a bye this week — for fifth place. Ilwaco will face South Bend the following week in the regular season finale, while Rainier will face the winless Chief Leschi.

Whatever two teams finish fourth and fifth in the Pacific League will face either the number two or number three seeds from the Central League. Currently, three teams — Adna, Pe Ell-Willapa Valley and Morton-White Pass — are tied for third with 5-2 records.

• This was Ilwaco’s first home night game since week one when it was discovered that there was a problem with the stadium lights. To help illuminate the field, four generator-powered lights were set up around the stadium.

• Bell’s touchdown catch in the first quarter was his 11th of the season, which leads the team.

• Quarterback Jack Odneal is less than 100 yards from eclipsing the 1,000 yard passing mark for the season.

Watch now: Here's what Frost, Huskers are saying heading into Week 2 vs. Wisconsin