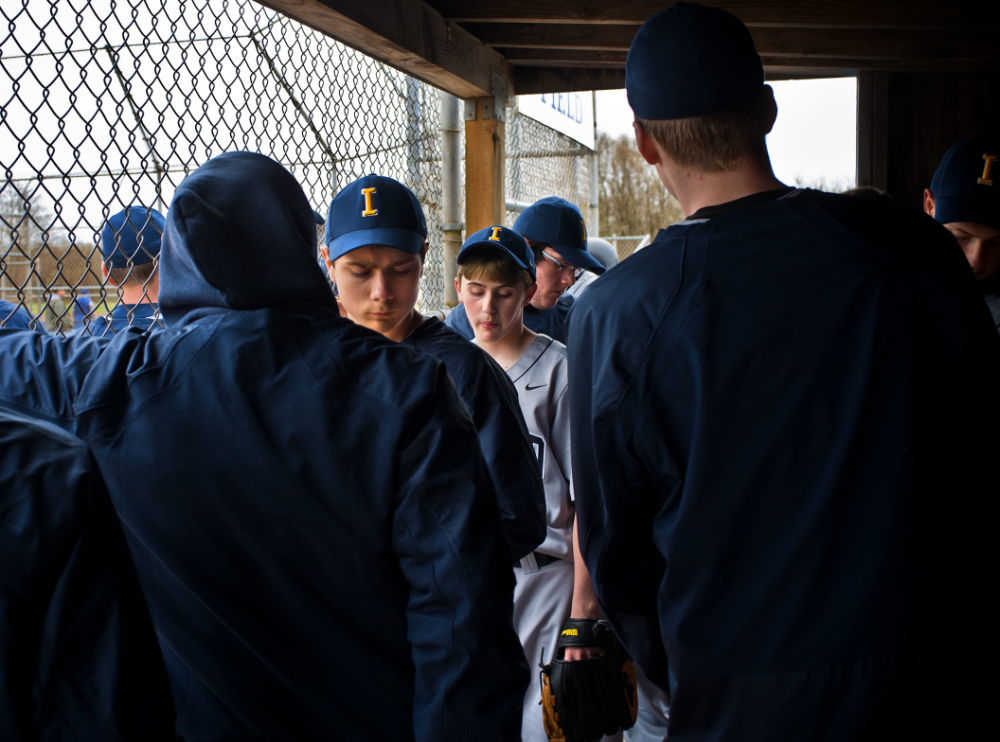 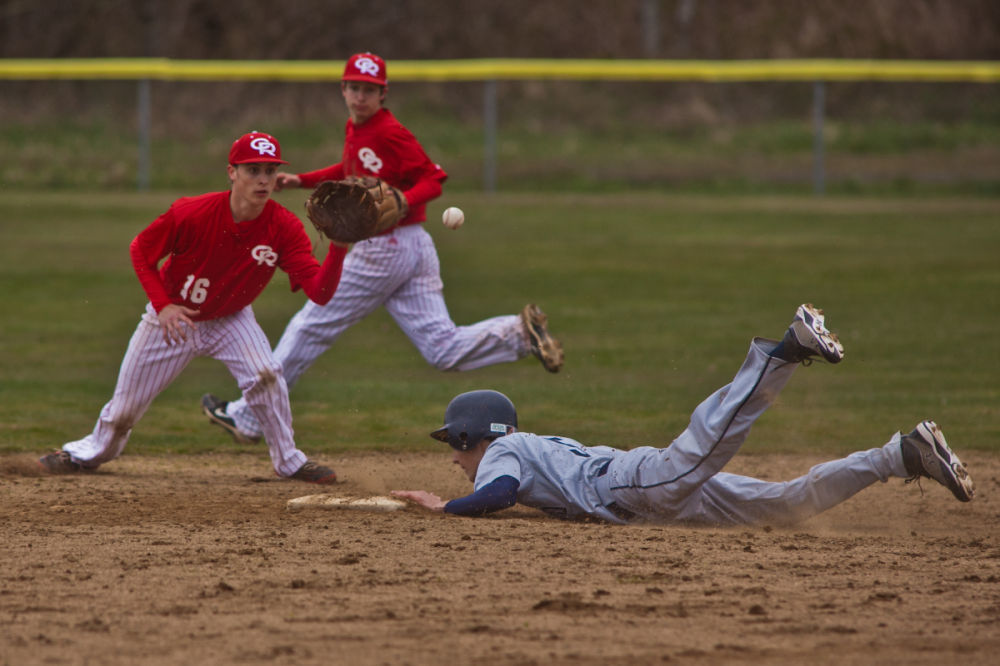 <p>Cody Schmidt slides in safely ahead of a throw to second after a wild pitch.</p>

<p>Cody Schmidt slides in safely ahead of a throw to second after a wild pitch.</p>

LONG BEACH  Castle Rock crushed Ilwaco 21-0 and 11-1 in a Trico 1A League doubleheader in Long Beach March 26. The Rockets scored in every inning in the first game and put up a crooked number (greater than a one or a zero) in four of the five frames in the second game. Both contests were halted after five innings due to the mercy rule.

The Fishermen threatened to score in the first inning of the first game when Cody Schmidt and Tyler Milligan both reached base on singles to lead off the game. However, both were picked off on the same play to clear the bases. Austin Wirkkala then promptly laced a two-out single to left centerfield that would have surely put the Fishermen on the board.

From that point only Marcus Cox reached on a base hit the final four frames. In the meantime the Rockets exploded for 19 more runs over the next four innings, even as substitutes were inserted up and down in their lineup.

In the second game, Castle Rock scored two in the first inning and Ilwaco scored once in the third to give the Fishermen hope, trailing only 2-1. Schmidt singled and moved to second on a wild pitch. Wirkkala belted a double to right center to easily plate Schmidt, but Wirkkala was stranded.

In the bottom of the second inning Cox at second base nearly pulled off a rare triple play. He snared a Rockets line drive, stepped on second to force out the second runner and his throw to Matt MacDonald at first base just missed making the third out of the inning. Unfortunately, Cox had injured his left shoulder the batter before trying to make a diving catch and Cox will likely miss the rest of the season.

In the bottom of the sixth the wheels fell off for the Fishermen as Castle Rock crushed the ball for six hits and six runs. They scored three more in the bottom of the fourth and Ilwaco was not able to keep the game alive in the top of the fifth, losing 11-1 by mercy rule.

Daniel Weyl and MacDonald singled sharply in the second game and the speedy Weyl pilfered second base, but both were stranded. Cox also beat out a bunt for a base hit, but Wirkkala was tossed out at the plate trying to score from second base on the play, ending another Fishermen rally.

Schmidt made a diving catch in center in the first game and Weyl started a nifty double play at third base for Ilwaco.

My curve was working well to start the second game, but my best pitch was the fastball up and in. I hit the double that drove in Cody on a fastball right down the middle. We definitely started and played much better the second game, Wirkkala explained.

I hit a fastball and then moved up on a wild pitch. I scored on Austins double, Schmidt said after playing well in center and pitching in the initial fray and catching the nightcap.

I couldnt find the mitt and couldnt get the ball in the strike zone when I pitched today. I did contribute a single and a bunt base hit. I have been working on my bunting, Cox related before finding out about his injury the next day.

For the Rockets, Kole Beckers was 3 for 5 with a double and five RBI in the first game. T.J. Catlin Brenden Ohlson, Nick Harriman, Nathan Carroll and Mason Klingberg each had two hits, and Austin Elf slapped a two-run double.

Ilwaco is now 0-6 in the Trico and 0-7 overall, while Castle Rock improves to 5-1 in league play, is tied for first place with Kalama and is 5-2 for the season.

Milligan rights ship as IHS pulls away for 20-7 win

NASELLE  Tyler Milligan had a rough couple of innings, but then righted the ship to shut out Naselle the final three frames as the Fishermen pulled away for a 20-7 non-league win in Naselle March 28. The Comets had belted out five hits and taken a 7-2 lead after two stanzas, but then the Fishermen bats and gloves took over to score the next 18 runs in a game halted after five innings due to the mercy rule.

You could just see our confidence grow. It was nice to have a turnaround in a game like we did today and have the guys see what they can do, Ilwaco coach Dave Tapio said. Tyler settled down and after the first two innings he got nine outs without a hit and he only walked one in the last three innings.

Ilwaco broke on top 2-0 when Cody Schmidt reached on an error and Austin Wirkkala and Daniel Weyl both singled. In the bottom of the first the Comets exploded for four runs when David Blaylock beat out an infield single, Skyler York and Paul de Montaudouin worked for walks and Sam Scrabeck cleared the bases with a grand slam triple to deep left center. Moti TutuUs sacrifice fly brought in Scrabeck.

York shut out the Fishermen in the second thanks to a strike out and later a strong throw from leftfielder TutuU to home plate to cut down a runner. The Comets scored three runs on singles by York, TutuU and Ray Shotwell and walks to Tom Shotwell and Scrabeck in the bottom of the second.

From that point on it was all Ilwaco as they took advantage of eight Naselle errors and eight walks to go along with their season-high 18 base hits.

The Fishermen tied the game at 7-7 in the top of the third when Wirkkala and Eli DeSimone singled and Comets pitchers walked five. Ilwaco broke out the hitting sticks in the fourth to score eight runs. With one out Kienyn Adams, Matt MacDonald, Brandon Sparks, Hjalmar Liljedahl, DeSimone, Milligan and Wirkkala all slammed singles and Schmidt doubled.

It was nice to see us really start hitting from the top of the lineup to the bottom, Tapio praised. Liljedahl, Schmidt, Milligan, Wirkkala and Sparks spanked singles in the top of the fifth to score five more runs.

Weyl at third base, Schmidt in center and DeSimone behind the plate all turned in stellar defensive performances, but the story of the game was Milligan settling in to walk only one batter after the second inning and to strike out four for the game.

Defensively for Naselle Calvin Zimmerman made a diving catch in centerfield and pitched a hitless fifth inning, striking out one and allowing five unearned runs.

We walked too many and were far from sterling on defense, but give Ilwaco credit. They hit well and (Milligan) settled in and pitched a good game, Naselle coach Pete Donlon said.

I have to work on my control, get my breaking ball over and work on holding runners on base, said York.

For the Comets Ray Shotwell, TutuU, York and Blaylock singled and Scrabeck tripled. Ilwaco was led at the plate by Wirkkalas 4-5. Schmidt and DeSimone were 3-4 and Milligan and Liljedahl were both 2-4. Weyl, Adams, MacDonald and Sparks each had base hits for the winners.

Ilwaco improved to 1-7 on the year, while Naselle fell to 4-2 on the season. Both teams will have spring vacation off. The Comets will host Taholah April 8 and the Fishermen will next have Stevenson visit April 9 in a doubleheader, with all three games being league contests at the local diamonds.