<I>DAMIAN?MULINIX/Chinook Observer</I><BR>Stevenson's Matt Brown celebrates after putting in what would be the game-winning basket for the Bulldogs. 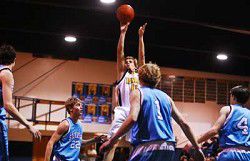 <I>DAMIAN?MULINIX/Chinook Observer</I><BR>Ilwaco senior Justin Short pulls up for a jumper over Stevenson defenders in Friday's game. Short had 6 points in the game before fouling out in the second half - one of three of Ilwaco's starting five to foul out.

<I>DAMIAN?MULINIX/Chinook Observer</I><BR>Stevenson's Matt Brown celebrates after putting in what would be the game-winning basket for the Bulldogs.

<I>DAMIAN?MULINIX/Chinook Observer</I><BR>Ilwaco senior Justin Short pulls up for a jumper over Stevenson defenders in Friday's game. Short had 6 points in the game before fouling out in the second half - one of three of Ilwaco's starting five to foul out.

ILWACO - Stevenson's Cody Lloyd knifed into the lane to sink a twisting jump shot with 1.2 seconds remaining, giving the Bulldogs a 61-60 come-from-behind Trico League victory at Ilwaco Friday. Coach Kip Meinhardt said, "We had several opportunities to win this game, but they made the final play and we did not. I feel like we are snake bit this season as we have lost several games in the last few seconds."

With 4:02 left, Ilwaco was up 58-50 after Karl Oman knocked down an old-fashioned three-point play, but moments later Justin Short fouled out with six points, Cody Pierson exited with his fifth foul at the 2:06 mark and Oman was whistled for his fifth with 1:56 remaining. Pierson had 16 points and Oman 15 at the time.

The Bulldogs came back to within 58-57 with 1:15 remaining in the game. Patrick Whealdon sank a pair of foul shots with 1:02 left to make the count 60-57, but then the Fishermen committed two costly turnovers and whiffed on four consecutive free throws, including a pair of freebies with seven seconds remaining.

Bobby Byrd blocked a Bulldog layup attempt and Kyle Breckinridge yanked down two of his eight rebounds during the final minutes to give the Fishermen a chance for the win. Ilwaco had eight turnovers in the last period and missed five of their final six free throws, however.

The Fishermen had vaulted to a 15-1 lead in the first period, but foul trouble in the second stanza allowed Stevenson to go ahead 33-32 with 1:46 before intermission. The Bulldogs tied the contest at 43-43 mid-way through the third period and were up 45-43 with 2:58 to go in the third quarter.

Coach Kip Meinhardt was philosophical following the contest. "We had some kids in pressure situations that ordinarily wouldn't be in that spot. If they can learn from their experiences we will be a better team. Our goal now is to make the playoffs and if we can beat Kalama, White Salmon and LaCenter again we should be there." The Fishermen are in a tenuous spot, currently third in the Trico with a league record of 2-3 with both Kalama and Columbia (White Salmon) a game back. Only the top three teams in the Trico receive automatic berths to the district tournament.

The Fishermen were 20-43 from the field for 47 percent and 17-29 from the line for 59 percent, while Stevenson was 22-65 for 34 percent from the floor and 15-27 from the line for 56 percent. The Bulldogs out-rebounded Ilwaco 39-37 and forced 20 turnovers, while committing 16 of their own. Fourteen of the Fishermen's 20 miscues came in the second and fourth quarters when their guards were in foul trouble or fouled out.

Missed shots put Bruins past Fishermen, 58-56 WHITE SALMON - The Fishermen had their chances, but a bevy of missed shots including a one-and-one opportunity at the free throw line with three seconds remaining, doomed Ilwaco to a 58-56 Trico League loss at Columbia of White Salmon Jan. 26. The Fishermen had led by as many as 50-45 late in the third period, but the Bruins went on an 11-0 run over a five-minute span and Ilwaco was unable to catch up.

"I think that place (the gym at White Salmon) is jinxed. Every year we either lose a close game or win by the skin of our teeth in overtime," coach Kip Meinhardt mused following the nearly five hour bus ride home. "We missed a ton of inside shots and it wasn't just one of our guys. And we still had a great chance to tie it at the line."

The home team fired up 21 foul shots, making 12 (57 percent) to Ilwaco's six of eight tries from the stripe in the fray. Ilwaco sank 23 field goals to 21 for Columbia, including four three-pointers for each squad. Fouls were 20-17 in favor of the Fishermen.

Karl Oman led Ilwaco with 20 points and Ryan Kukula came off the bench to tally 10. Kyle Breckinridge and Justin Short added eight apiece, Bobby Byrd five, Patrick Whealdon three and Ross Kukula a pair of points. Starting post player Cody Pierson had to sit out the contest due to routine precautions after he apparently suffered a concussion the week before.

The Fishermen are now 2-2 in the Trico and 6-8 for the year, while Columbia improves to 2-3 in league.

Photos: Recruits get a taste of Husker football at Friday Night Lights