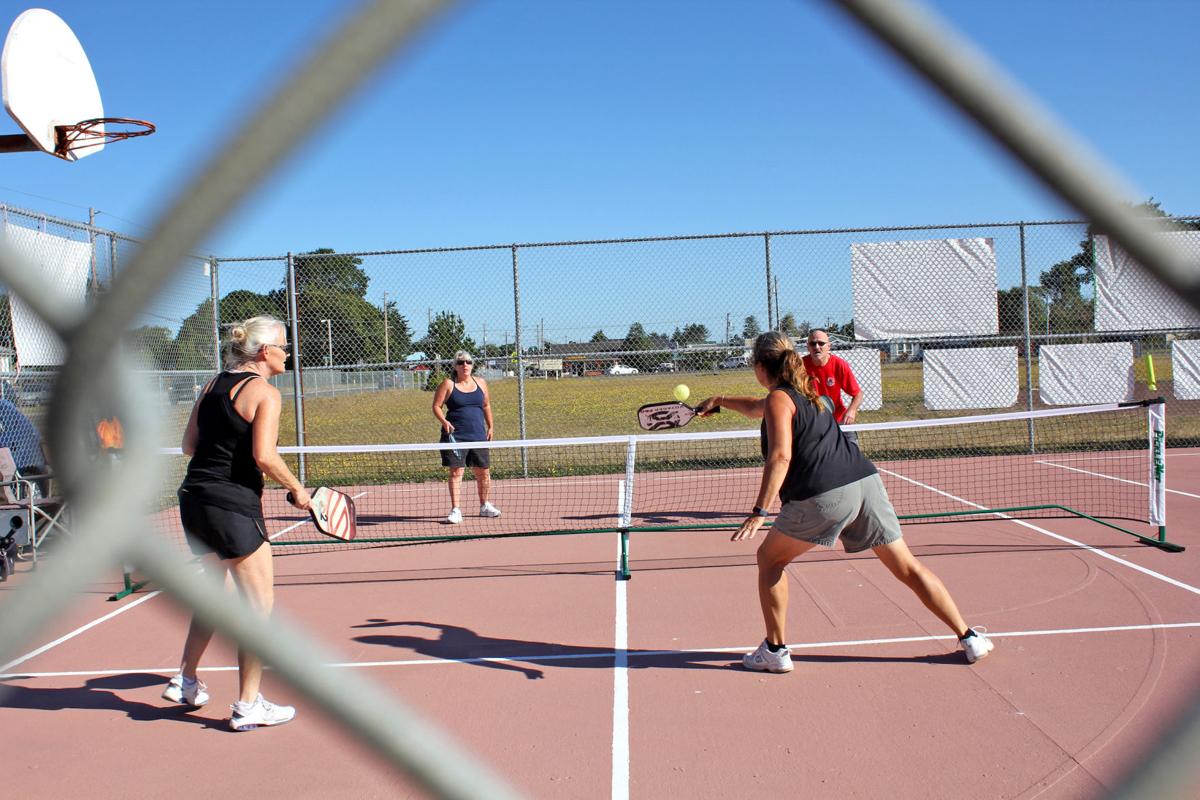 Pickleball is the latest outdoor sports craze to hit the Long Beach Peninsula. On the two colorfully painted courts across the street from Ocean Park Elementary School, a group of enthusiasts enjoys the exercise and the camaraderie. 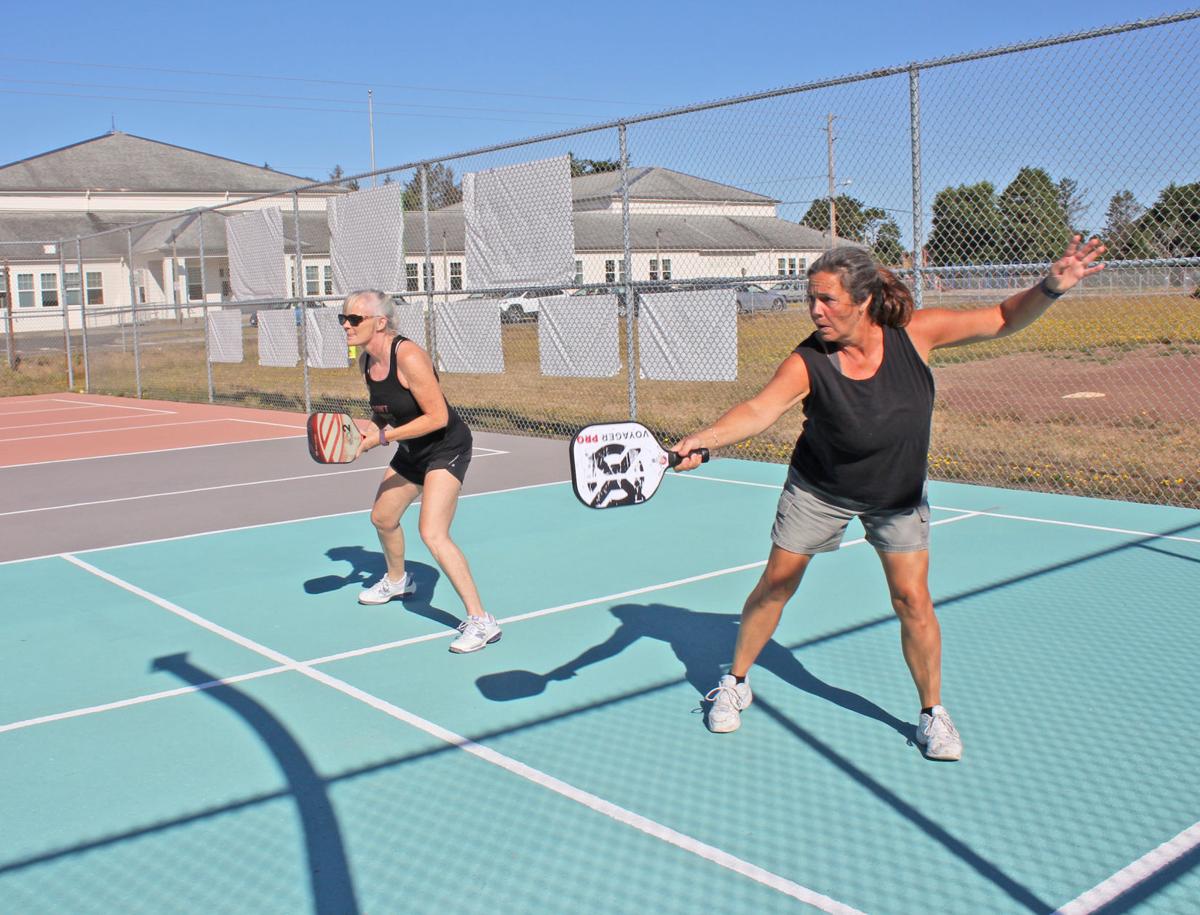 Chris Manning of Ocean Park, right, demonstrates some good form as she returns the ball while partner Diana Rowse of Long Beach shows her concentration awaiting the return.w 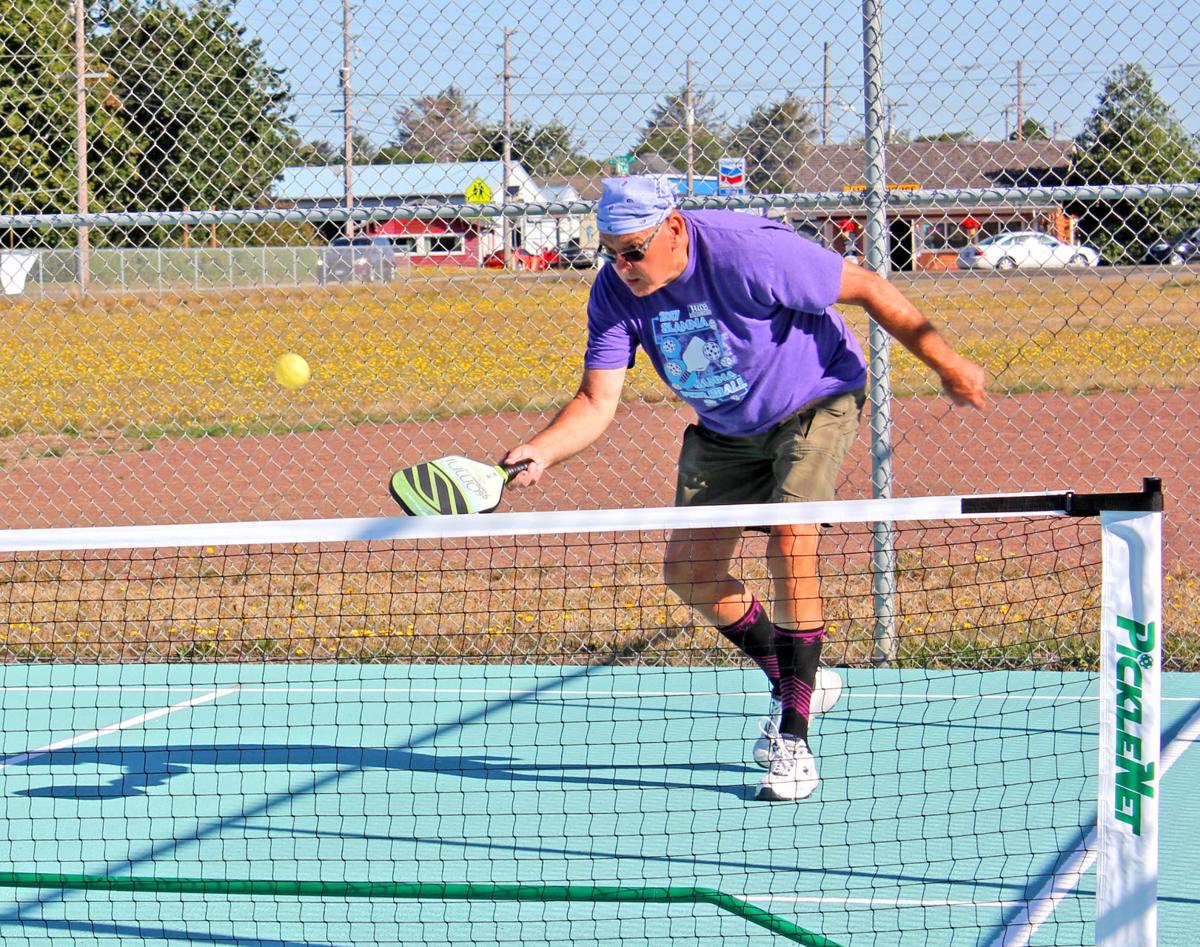 Frank Street of Ocean Park, pictured returning a hard volley, is the driving force behind the pickleball group on the Long Beach Peninsula. He serves as an an ambassador for the United States of America Pickleball Association and is keen to recruit others of all ages to his sport. 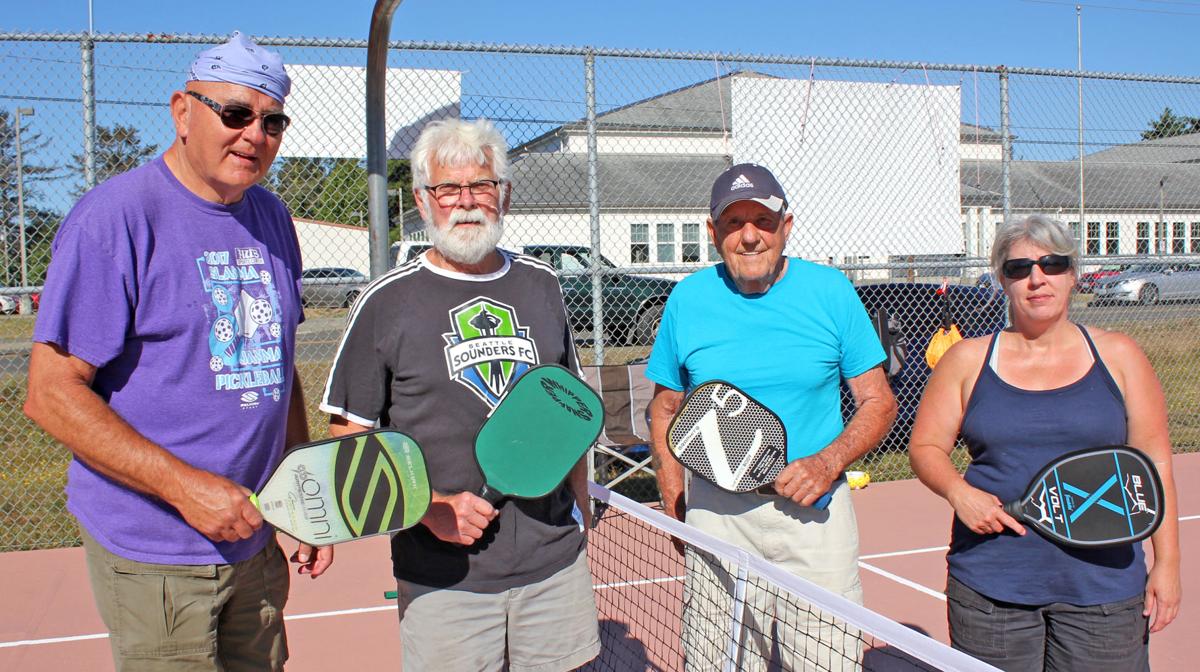 During a pause in the court action, organizer Frank Street of Ocean Park, far left, stops for a photo. With him, left to right, are fellow competitors Doug McSweyn and Don Lutz, both of Ocean Park, and Tammy Olson of Long Beach.

OCEAN PARK — Frank Street is on a mission. He wants people of all ages to embrace his sport — pickleball.

It’s nearly impossible to describe it without saying “it’s like tennis.”

The game is played on a court marked with white lines and played with a bat and ball.

That’s really all a newcomer needs to know.

“During the summer months, the Long Beach Peninsula has many property owners and visitors that come for the summer or just a day or two,” said Street. “Like me, some are snowbirds who learned to play at senior facilities while south.”

Thanks to approval from the Ocean Beach School District, Street and his fellow pickleball players can be seen playing regularly on two courts in Ocean Park.

They are located across Vernon Avenue from the Ocean Park Elementary School at 256th Place. You can’t miss them because the court surfaces are salmon and a bluey teal — what Street calls his “crazy paint scheme.”

First, Street’s loose-knit group power washed the outdoor basketball area. “Several local residents and commercial painters donated about 30 gallons of paint,” he noted. “Color of the courts was determined by what was donated.”

Street is accepting donations to raise money to pay for spare nets and equipment that can be placed in a locked box on the site. “Any one wanting to play can just arrive any time in their tennis or court shoes, open the job-box, set up the portable nets and begin playing.”

On one recent morning, Street was playing among two sets of four players, just like tennis doubles matches.

“It’s a good game for all ages,” said Diana Rowse of Long Beach.

Street is an ambassador for the United States of America Pickleball Association and envisions the sport growing on the Peninsula beyond this summer.

A little research shows that the sport began in Bainbridge Island in 1965 thanks to the family of Joel Pritchard, who later became Washington’s lieutenant governor.

Its vocabulary is about the same as tennis — clever shots are dinks and lobs — and there’s also “poaching,” stealing a shot from a better-placed partner.

The court is closer in size to that used in badminton, but the net is considerably lower more like tennis. Players hit a whiffle ball back and forth using wooden paddles which create a distinctive “thunk.” All serves are underarm and the ball can bounce once or be hit on the volley.

Players play to 11 points, but to win must be ahead by two.

Whatever the technicalities, the game delights Tammy Olson of Long Beach for another reason. “I just like being outside,” she smiled.