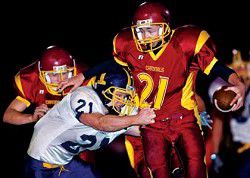 <I>DAMIAN MULINIX photo</I><BR>Ilwaco senior Eddie Knick, above, brings down Winlock's Nick Nowack during one of the Cardinals' many spread offense plays during the first half of Thursday's District crossover game. 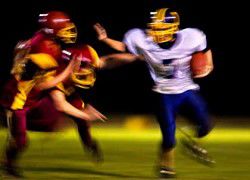 <I>DAMIAN MULINIX photo</I><BR>Many underclassmen got a chance to play in the second half, including Zach DeSimone after the Fishermen took a 40-point lead.

<I>DAMIAN MULINIX photo</I><BR>Ilwaco senior Eddie Knick, above, brings down Winlock's Nick Nowack during one of the Cardinals' many spread offense plays during the first half of Thursday's District crossover game.

<I>DAMIAN MULINIX photo</I><BR>Many underclassmen got a chance to play in the second half, including Zach DeSimone after the Fishermen took a 40-point lead.

WINLOCK - On the first play from scrimmage Justin Short found a wide-open Matt Kaino for a 63-yard touchdown pass and Ilwaco never looked back as they whipped Winlock 48-14 in the season finale for both teams. For the Fishermen the victory was "something to hang our hat on," coach Kevin McNulty said. "Our seniors finished strong and this win helped us build for the future."

Eddie Knick finished his brilliant career with 164 yards rushing in nine carries, caught a pass for three yards, returned a punt 37 yards to set up a TD, scored twice himself, and led his team in tackles - all in the first half. McNulty and his coaching staff, having been on the brutal end of a run-away score several times this season, mercifully kept Knick on the sidelines in the second half. "We did a lot of things quite well tonight," McNulty said. "We went through a very difficult five-game stretch and it was nice to be on the winning side this time."

Knick scored Ilwaco's second touchdown of the first period after he rambled for 47 yards to set up the score on a one-yard plunge. Jake Nesbitt crashed over the goal line from one yard out to begin the second quarter, Knick raced 63-yards for a TD five minutes later, and Short tossed a 38-yard scoring strike to Kolby Kirby to give Ilwaco a 36-6 half-time lead. Knick finishes with 1,287 yards on 197 carries for his senior season and he ends his career with 4,887 yards and 45 touchdowns.

In the second half all 21 available players contributed to the victory. Defensively Ilwaco forced four fumbles and did not allow the Cardinals to complete a single pass during the contest. Trevor Couch intercepted one pass to stop a Winlock drive. Nick Morrison was again outstanding defensively and helped open gaping holes for no less than 12 Fishermen who packed the pigskin for a total of 277 rushing yards.

Nesbitt gained 45 yards on nine carries and caught a pass for six more. Scott Simons gained two yards on a run from scrimmage, and he and Brandon Vitkoczy anchored the Fishermen offensive and defensive line with their solid play. Other seniors who did not play were Dan Beierle and Jordan DeSimone.

Tyler Starks and Hayden Blake also contributed mightily to the Fishermen's dominance in the line on both sides of the football. Short was six for nine passing for 113 yards and had another sure-fire touchdown dropped with the receiver having a 15-yard cushion on Winlock's frustrated pass defense.

"We appreciated the efforts of our seniors during a tough season," McNulty praised on behalf of coaches Les Nash, Nate Plummer, Nick Lyster and Gene Ford. "Now the underclassmen need to prepare for a very difficult league for next year. In order to compete they will need to get in the weight room consistently, participate in other sports and stay in shape. Ending on a high note like we did should help motivate everyone."

Ilwaco ends the 2007 campaign with a 3-7 record and they finished sixth in the Trico with a 1-5 mark.