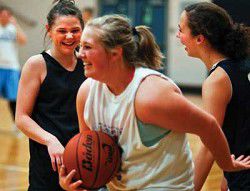 Comets Haleigh See and Mackenzie Mathews have a good laugh after Mathews is caught in a halfcourt trap during a recent practice. 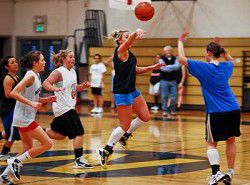 Comets Haleigh See and Mackenzie Mathews have a good laugh after Mathews is caught in a halfcourt trap during a recent practice.

NASELLE - "The girls really had a super summer season and we showed marked improvement," Naselle Coach Russ Hickman says. "We don't have a lot of overall depth or team speed in the program, but our top nine or 10 girls are all playing well in our early practices."

Last season the Comets finished 11-13 after splitting four games at district. Gone are sparkplug point guard Nicole Laney and outstanding shooting guard Emily Green. Returning for the Comets will be reining Pacific 2B League MVP Carley Kitzman who averaged 12.7 points per game last season as a sophomore and was also the leading rebounder and an excellent ball-handler for the Comets. Naselle will also count on at least three and maybe four seniors to lead the way.

Nicole Tarabochia was second in rebounding and rolled in 6.6 points per game as a forward. Guard Haleigh See, who has already been hampered by injury, scored 5.3 points per game last season and Taylor Wasmundt added 4.8 points as a shooting guard. A healthy See could take over the point guard position for the Comets. Kaelee Dearmore averaged 4.2 points in 2010, but missed almost half the games with injury and illness and her availability is questionable for this season.

Underclassmen hoping to contribute are Mackenzie Matthews, Vicky Corona and Ciara Sandell, who all saw some varsity action last year. Freshmen Kayti Nelson and Katie Green have also shown promise in summer basketball and early turnouts for Hickman. "I am impressed by how well our younger girls played in the summer. We would play everyone equally and they held their own against everyone we played."

Hickman says, "With the new (regional) state tournament format our season is condensed. It looks like we'll be playing a game and then having a practice and then another game and so on and not have a lot of time to work on fundamental skills, which is not good for the game. We are ahead of where we were last year as a team, but I'll miss the extra days of practice as will everyone else."

Offensively the Comets will "spread the court and attack the basket" according to Hickman. "Our weak side cutter series was successful last season against most teams and those that adjusted we will have to work on other options. Defensively we will try to pressure teams. Even though we lack team speed we will use full and half-court pressure to get our opponents away from what they want to do when they have the basketball."

Hickman sees Northwest Christian with a plethora of talent as always from the Olympia area as being league favorites. South Bend is much improved and North Beach and Raymond also have very talented teams. Ocosta and Valley appear to be in rebuilding mode. "We hope to be competitive," Hickman says.

In the Central League Adna, Toutle Lake, Napavine, and PeEll are "very, very good" according to Hickman. With the new regional state tournament format four District IV teams will qualify. The new WIAA format shortens the season by one week and dictates that only eight teams will travel to Spokane instead of 16 as has been the case since Washington basketball tournaments began in 1931.

Hickman, as is the case with the majority of coaches in the state, is not in favor of the change. "I don't like the new system for a number of reasons, but what can you do. We'll just practice hard and see how we come out." Naselle will have a parent's night and scrimmage at 6 p.m. Saturday, Nov. 27.

The Comets open their season by hosting 1A powerhouse Toledo Nov. 29 and Warrenton Dec. 1. They then visit Ilwaco Dec. 6 and Wahkiakum Dec. 9 before opening league play at South Bend Dec. 11.