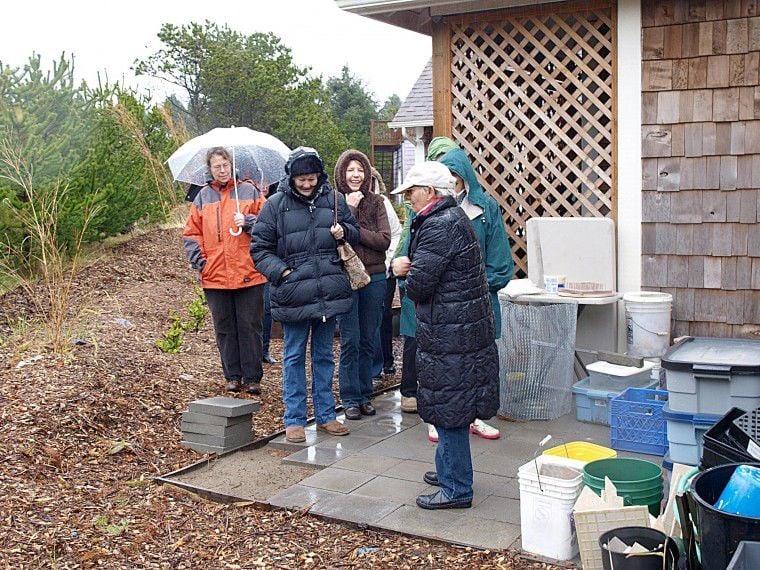 <p>Jan Richardson hid nothing, to the point of showing an unfinished area to garden club members. Behind them is a row of plants deer won’t want to dine on. The mulch covering much of that backyard area was acquired from the Surfside Homeowners’ Association and has lasted two years. The small patio is made by stepping stones on sand.</p> 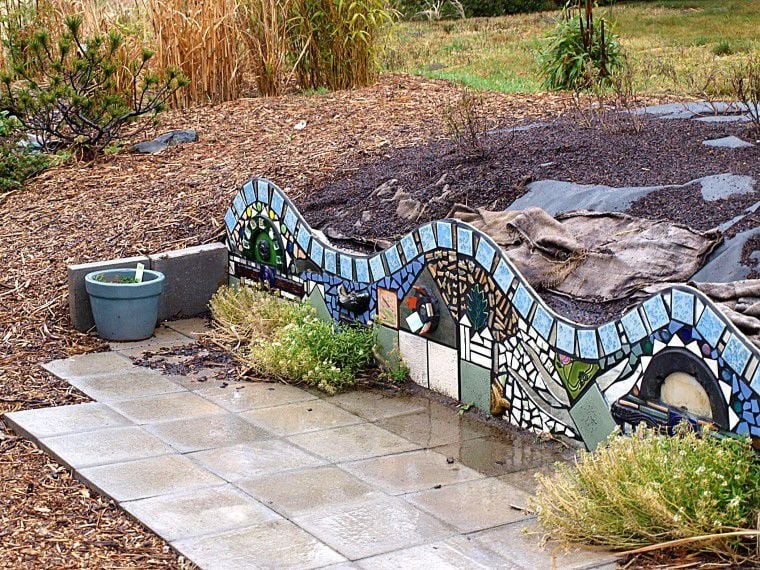 <p>Jan Richardson wants her landscape to be deer resistant, but her gardening instinct is joined by her fondness for art. She said she was devastated when told two years ago that this house she was building would require an above ground septic system. She transformed the “Plain Jane” mound border into a colorful, unique focal point by lining the long edge of the mound with a custom ceramic mosaic. She has been a noted clay artist for decades and put her skill to use in this creation.</p>

<p>Jan Richardson hid nothing, to the point of showing an unfinished area to garden club members. Behind them is a row of plants deer won’t want to dine on. The mulch covering much of that backyard area was acquired from the Surfside Homeowners’ Association and has lasted two years. The small patio is made by stepping stones on sand.</p>

<p>Jan Richardson wants her landscape to be deer resistant, but her gardening instinct is joined by her fondness for art. She said she was devastated when told two years ago that this house she was building would require an above ground septic system. She transformed the “Plain Jane” mound border into a colorful, unique focal point by lining the long edge of the mound with a custom ceramic mosaic. She has been a noted clay artist for decades and put her skill to use in this creation.</p>

OCEAN PARK  As their Jan. 20 business meeting came to a close, members of the Green Fingers Garden Club pulled out their rain gear and dashed to their cars. Although it was a soaking wet day, that didnt stop the gardening enthusiasts from forming a car caravan behind Jan Richardsons pickup truck, heading to Surfside to tour the landscape she has been perfecting since she finished building her house two years ago.

After cars were parked, Richardson summoned the group into her house, where she explained her garden goals. They could all drip dry, at least partly, before venturing outside again to tour the grounds.

Gathering in the plank-floored kitchen area, club members listened to Richardson, who started with some background on her plant choices. Ive been in this house two years, she said, explaining that she had planned and built the home. One of my things is, I dont do grass. I will not mow. I cannot start mowers, so Im just not having grass.

She doesnt do mud, either. I really lucked out and got a big load of mulch from the Surfside homeowners Association, she told the group, who would later learn how easy it is to walk around Richardsons home, even on a wet day like this one, and not bog down in muddy soil.

Richardson was standing near her kitchen sink, above which is a greenhouse window she has adorned with houseplants. The glass gives a clear view of the south side of her yard where her mound system was built. She glanced at it and recalled, I was horrified when I found out Id have to have an above ground septic. She didnt say anything about the colorful, creative mosaic she made to line one long side of the sandy mound. Instead, she spoke of her choice of plants.

Ninety percent of the stuff I plant, deer wont touch. Two years ago, when she was told she could put in plants on top of the septic system, she researched it a little bit. She has this project started, using lavender. Its unstoppable on this berm, she said.

Near the mound, she pointed to where she had planted Gunnera, which is described in many garden books as a stunning perennial. This plant, she explained, is prickly. Deer dont like prickly things.

Before moving here, Richardson resided in Maryland and she often referenced her comparisons with what she grew out there versus what shes trying here. With the strongly defined Maryland seasons, she explained, There are seasons when deer will, or wont, go after things. (Back there) they wouldnt touch Daylilies until they bloomed. Here, they havent really done much with the Daylilies. I was surprised.

One disappointment shes experienced here is that deer share her fondness for flowers. Theyre hard on flowers  like geraniums  which irritates me, because I love them. But she said the tradeoff is that deer dont seem to dine on crocus or daffodils. They are, however, very fond of tulips.

Another thing shes observed over the years, in both Maryland and here on the Peninsula is, Deer dont like things that have a strong aroma. And another interesting thing Ive noticed is that they will eat Asiatic lilies, but they wont eat Oriental because they smell. Another observation Richardson has made is that deer dont seem to like succulents.

As she spoke, others in the club chimed in with their similar experiences. Exchanging ideas is a big plus to belonging to this group. And with the ideas theyd shared inside of Richardsons house, they all seemed ready to step outside and again brave the rain while they toured the yard.

Lingering for a short while on the covered porch, Richardson pointed out some highlights of the west side of her yard. Youll see an area where I did a lot with stones, she said. Both beneath the stones and under some areas of mulch, she had placed old carpeting for a base.

Several club members asked about a tall, wide ceramic pot in the yard near Richardsons porch. It probably holds 20 or more gallons, but was just partly full of rainwater. She answered, I had fish in it one year, but it got really grody looking. So right now, its just a basin and Im thinking about drilling some drain holes in it. The pot adds an artistic flair to that part of the yard.

She pointed to another area where she said a lot of crocus were coming up. Then, she nodded toward the porch steps and the group followed her to the south side of her yard, where the colorful mosaic lines a long side of the septic mound.

Several times, the people gathered around single plants, bending over to look as though searching for treasure. There was a lot of conversation at each stopping point, including a short discussion about experiences with Escallonia. The deer like it and they werent supposed to, Richardson said and others nodded in agreement.

Soon, they followed Richardson around to the east side of the house where she pointed to different yard projects and commented. Im the Mad Composter, she said with a smile. Producing bio-char is part of her process. And I have a little worm bin, too, she said. Their favorite thing in the world is coffee grounds. One club member glanced at the compost area and worm bin and said to Richardson, Youre into all of it.

By the time everyone got to the north corner of the house, rain was dripping off the bills of the hats or off umbrella edges. Coats were soaked. But nobody had signs of any mud on their footwear, a testament to the way Richardson had put down mulch in her yard. Under an unfinished path she is building from the house to a shed that will become a part time art studio, the base of carpeting was exposed just enough to see how it worked.

When the tour was over and the women climbed in their vehicles to leave, their heads must have been churning with ideas that could be tried at their own homes. Thats certainly one of the big advantages to being a member of Green Fingers Garden Club  the sharing of ideas.

Like Richardson, many of the members have faced the dilemma of dealing with deer in their gardens. Earlier during the meeting, club president Mary Peterson had voiced her frustrations of trying to have nice plants when large numbers of venison-on-the-hoof wont stay away. That, coupled with wind, provides double trouble. She explained, Im on the ocean side (in Surfside). On a normal day, I get 15 to 20 mph winds. The backyard is total sand, so the deer and my dogs have it. I have a deer that comes up on the deck, too. She did last year and had two babies with her. I found that with deer all over, I do 90 percent of my gardening with pots on the deck. Its a raised deck and Ive got an upper level deck and a main level.

She has lavender in the yard, which deer arent fond of, but with all the different plants in the yard or in containers on the deck, her system is, Try and see if it works here and if it doesnt, Ill try something else. Its a constant experiment.

You can bet club members will share ideas and help Peterson find solutions. And outside speakers at meetings bring a wealth of ideas. Diane Curry had commented earlier, Weve had a lot more informational programs in the last two years. More lectures and people coming to talk.

And this years meetings are already being planned to bring on the ideas. Generally, whoever hosts the meeting picks the topics.

Jan May is growing garlic and plans at one meeting to demonstrate how to braid it.

Diane Curry and John Dickerson will host the July 20 meeting. We have a new greenhouse, Curry said, adding that they are also raising red worms, giving them an opportunity to present dual topics of vermiculture and greenhouse growing.

The next meeting is Feb. 17. Plans for time and location are still being formulated. Peterson said that meetings are always on the third Friday of the month usually around noon, depending on who the hostess is and what she wants to do for that months program.

Yearly dues are $15. Anyone interested in becoming a member of Green Fingers Garden Club can contact Peterson via e-mail at: thelaughingdolphin@charter.net.

And just why are green fingers referenced in the clubs name, as opposed to thumbs of the same hue? Diane Curry has the answer. You use fingers to plant. Not your thumbs. And according to Peterson, those green-fingered current members, who so thrive on both the social and informational aspects of the club, are simply a small group of women, who enjoy each other and our gardens. Age is just a number, so actually, were just taller kids who still like to play in the dirt.

Watch now: Packers fans and 2 Buccaneers’ fans gear up for the big game