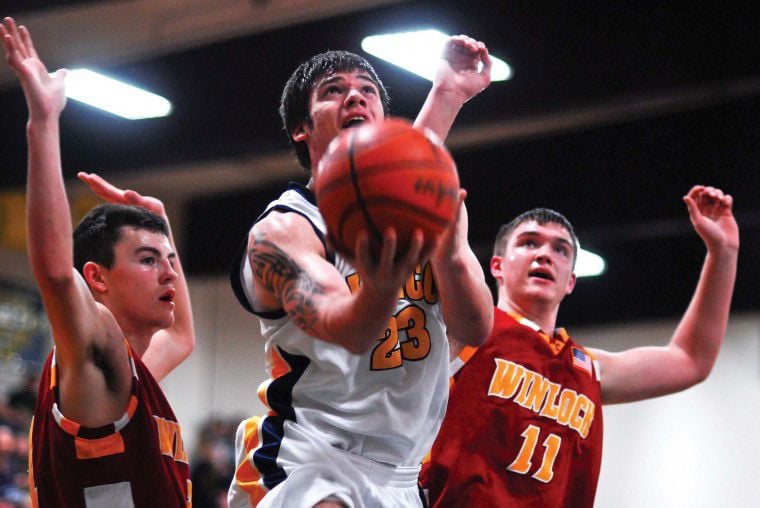 Kyle Breckinridge was a force down low, scoring 23 total points and grabbing 19 rebounds during the tournament. 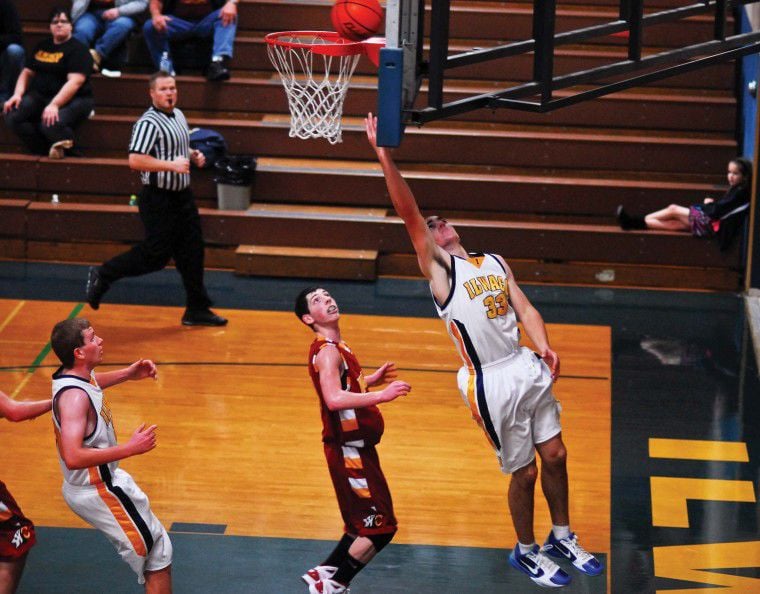 Bobby Byrd slips in a shot on a fastbreak in the Fishermen's win over Winlock.

Kyle Breckinridge was a force down low, scoring 23 total points and grabbing 19 rebounds during the tournament.

Bobby Byrd slips in a shot on a fastbreak in the Fishermen's win over Winlock.

ILWACO  The Timberwolves tore open a 20-6 lead after one period and Ilwaco would get no closer until the end of the third period when they closed to within 49-35. Morton-White Pass [MWP] then extended the lead to as many as 23 in the fourth period on their way to a 71-49 win over the Fishermen in the championship game of the Ilwaco Holiday Tournament Wednesday, Dec. 29.

We ran into a deeper, bigger, stronger team and it was one of those nights when we just got beat. They stuck 10 three-pointers and we sank four, Coach Kip Meinhardt said. I was pleased with our effort, but we didnt shoot well against a talented team.

The Fishermen are now 6-2 on the year, while Morton-White Pass improves to 6-3 overall.

ILWACO  The Fishermen went on a 16-3 tear in the fourth period to pull out a 67-48 win over Winlock in the opening round of the Ilwaco Holiday Tournament Tuesday, Dec. 28. Patrick Whealdon sank four straight foul shots down the stretch to finish with a season-high 20 points and his three consecutive three-pointers in the third period were instrumental in Ilwaco busting open a 31-31 halftime tie.

Karl Oman tallied six of his 17 points and dished out three of his 10 assists in the final period, two of which went to Kasey Plato for key buckets in the late going. Kyle Breckinridge grabbed 10 rebounds to go with his dozen points to join Oman in the double-double ranks.

Plato finished with a season-high six points, Ryan Kukula poured in 10 points, and Bobby Byrd scored two and corralled eight boards in the victory. The Fishermen had started cold after a 12-day layoff with only 10 points in the first frame, but heated up for 21 in the second stanza to knot the contest at intermission. Breckinridge tallied a pair of baskets in the paint, Kukula hit a driving layin from a feed from Oman, and Whealdon knocked down a three-point shot and scored on a coast-to-coast layup following his steal on a 9-0 Ilwaco run to end the first half.

Whealdons three treys and a pair of threes from beyond the arc by Kukula helped build a 49-39 advantage to end the third period. Breckinridge added two more buckets inside and nabbed five of his 10 rebounds in the period. In the last period it was defense with a capital D as Winlock managed only one trey with less than two minutes to play, while Ilwaco rolled in 16 points to win going away.

We came out flat after the layoff and Winlock had an excellent defensive game plan against us. We hit five threes in the third period and couple in the second to open up the middle. Our zone really shut them down in the fourth quarter after their big man (Collin Kupers) hurt us early in the game and (Bryson) Coleman scored 11 against us in the third period alone, coach Kip Meinhardt said. I was pleased that we had four guys in double figures again and that we were able to grind it out the second half.