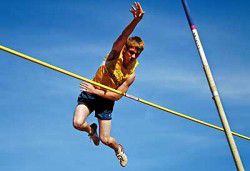 <I>Photos by DAMIAN?MULINIX/Chinook Observer</I><BR>With the bar set at 13 feet, Naselle's Tylor Nortrup easily propels himself across during the finals of the boys district pole vault finals. Nortrup won the event and will now compete at state. 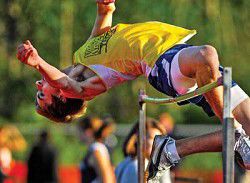 Naselle's Drew Macy contorts and leaps over the bar in the early rounds of the boys high jump at the district meet last Thursday night. Macy finished eighth in the competition. Macy also ran to a seventh place finish in the boys 400-meter race.

<I>Photos by DAMIAN?MULINIX/Chinook Observer</I><BR>With the bar set at 13 feet, Naselle's Tylor Nortrup easily propels himself across during the finals of the boys district pole vault finals. Nortrup won the event and will now compete at state.

Naselle's Drew Macy contorts and leaps over the bar in the early rounds of the boys high jump at the district meet last Thursday night. Macy finished eighth in the competition. Macy also ran to a seventh place finish in the boys 400-meter race.

RAYMOND - In a field where six athletes cleared the state minimum height (11-feet-6) and six of the 10 pole vault competitors surpassed their personal bests, Tylor Nortrup was clearly the most accomplished athlete as he soared over the 13-foot barrier with room to spare and nearly tied the state-leading mark of 13-feet-6.

Nortrup won the District IV pole vault in Raymond Thursday and punched his ticket to the state track meet in Cheney May 29 and 30 in the process. He will be joined by the Comets Nicole Laney who finished third in the 400-meter run with a time of 63.89, her personal best by over a second, and Laney was also third in the pole vault by soaring over the bar at 8 feet for her first time ever.

Pole vault coach Scott Smith exclaimed after Nortrup cleared 13 feet, "One-three, wow. Keep going." And Nortrup did, just brushing the bar at 13-feet-6 three times for his only three misses of the meet. "I felt good today," he said. Before his big vault he related, "I tried not to think of a thing, maybe just a few songs. Then when I was at the top of the pole I started to think about going over the bar from there. Now I'm shooting for 14-feet and with a good week of practice you never know."

Smith said of his senior standout, "Tylor has prepared for this since the eighth grade. He works hard in the weight room and attends college camps. He has done what it takes to be a great pole vaulter and it paid off today."

Coach Debbie Denny said of Laney, "She does everything we ask of her as coaches. She entered the 800 to add stamina so she could do even better in the 400 and that worked out well today. Nicole is a veteran runner who is intense, but not tense. Her time in the 800 would have gotten her to state in most years, as well."

Laney, a junior, placed sixth in the 800 in 2:36.5, a personal best by nearly three seconds. Laney explained, "Before the 400 I had the idea that it would be an even race, that everyone was capable of winning. I need that pressure to go harder when I run. Now going to state my third year is really exciting. I want to win a medal this time."

In the District IV meet involving 16 class 2B schools and about 220 competitors Naselle had several athletes who also recorded their personal record times, heights or distances, but were unable to make the top five spots in the keen competition.

Drew Macy was seventh in the 400 with a PR of 55.93 and eighth in the high jump with a leap of 5-feet-6. Alex Bennett finished his senior season by clearing 10 feet in the pole vault, good for ninth place. Randy Hamm was sixth in the discus with a toss of 111-feet-1. "I had been throwing 10 feet further in practice, but it just didn't happen today. My knee (injured in football two years ago) might have been bothering me, but I have no excuses. I have next year." Cramer Smith ran a personal best 5:00.04 and finished ninth in the 1,600.

Tasha Stenvall had personal best times in the 1,600 (6:32.45) and in the 3,200 (13:35.25) but finished eighth and seventh in the two events. Jodi Christie also had a PR in the 400 (67.49) and finished eighth and she just missed a state invitation by finishing sixth in the pole vault by going over 7-feet-6. Taylor Wasmundt was eighth in the vault (7 feet). Wasmundt joined Samantha Bauer, Christie and Laney in the 4x400 relay in which the Comets claimed sixth place (4:35.33) in personal record time, but missed going to state by a mere two-tenths of a second.