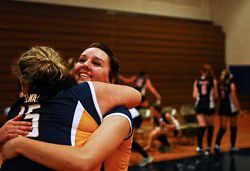 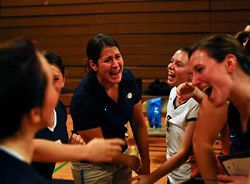 Ilwaco volleyball coach Marie Green couldn't hold back her emotions as her team came to together following the Lady Fishermen's first match win in three-plus seasons.

Ilwaco volleyball coach Marie Green couldn't hold back her emotions as her team came to together following the Lady Fishermen's first match win in three-plus seasons.

ILWACO - Finally the streak is over. The Lady Fishermen held off Toledo in three straight games to win their first Trico League volleyball match since Oct. 10, 2006. "We came back from our lapses and had several good scoring runs of our own. This was awesomeness," a teary-eyed and excited Coach Marie Green said after the first best-of-five victory in 62 tries for Ilwaco.

Senior Sydney Ward said, "We win in softball and we win in basketball and now we are starting to put it together in volleyball. This means so much to help turn things around." Alexa Wirkkala, also a senior who has never been on a winning volleyball team until Tuesday, said, "We were all in the game all night long. It is really nice to get the W." Ilwaco won 25-11, 26-24, and 25-19.

In game one the Lady Fishermen bolted to a 7-1 advantage behind a pair of Ward aces and a kill. Kenzi Wirkkala later served three straight aces and Alexa Wirkkala's back-to-back kills put the Lady Fishermen up 19-7 as they cruised to a 25-11 victory.

The second contest was tied 9-9 when Toledo went on an 8-0 streak to grab a commanding 17-9 edge. Not to be denied, Grace McPhail dished one of her 11 assists on the night to Kenzi Wirkkala and Ilwaco was off to a 7-0 scoring binge of their own to close to 17-16. Later Alexa Wirkkala's block knotted the score at 21-21 and her three aces put the Lady Fishermen up 24-21. A series of serve-return errors helped Toledo tie the fray at 24-24. A net call and Ward's ace handed Ilwaco the 26-24 game two victory.

The third game was tied at 6-6, 7-7, and 8-8 before McPhail tipped three kills just over the net for Ilwaco and set up Ward for a pair of kills. "I've never gotten so many tips for kills before. This was an amazing feeling," the sophomore setter McPhail stated. The Lady Fishermen were up 19-9 and after Alexa Wirkkala served an ace they had match point at 24-12. Nerves and the strong serving of Toledo's Giulia Daga, who had 10 aces in the match, brought Toledo to within 24-19. It was then that McPhail set Jackie Smith for her second kill of the match and the Lady Fishermen were in the win column.

Ward led Ilwaco with eight kills and served six aces. Kenzi Wirkkala added six aces and a pair of kills. Alexa Wirkkala had eight aces from the service line, three blocks at the net, and four kills. McPhail dished out 11 assists and had a career high five kills and topped the winners with five digs. Alexa and Kenzi Wirkkala, Ward, Justina Cornell, and Megan Clark each had a pair of digs. Clark and Amanda Bell each had a pair of aces and Clark had two blocks. "Everyone played well tonight. We kept our poise and stayed focused when Toledo would make a run at us," coach Green said.

"Getting a win has been a long time in coming for these girls. I was glad we were able to do it at home. When we were down 17-9 in the second game I called time out and flat out told the girls that they needed to show that they wanted to win because Toledo was taking over. Fortunately we got mentally tough and came back to win the match and all of our hard work paid in practice off," Green concluded.

Ilwaco is now 1-4 in the Trico and 1-5 for the season, while Toledo drops to 0-5 in league play and is 0-7 for the season. The Indians did not have enough players to have a junior varsity match.

Lady Rockets explode to 3-0 Trico win at IlwacoILWACO - Tierney Uhlenkott, sophomore middle blocker for Castle Rock led an explosive attack that defeated Ilwaco 3-0 in a Trico volleyball match at Carl Aase Gymnasium Thursday. Uhlenkott had 11 of the Lady Rockets' 27 kills, but the velocity of her hitting was what was even more impressive than her numbers.

Castle Rock won 25-10, 25-11 and 25-4. The first game they had scoring runs of 8-0 and 6-0 before pounding home the final four points of the game. The second contest Ilwaco took a 2-0 lead on Alexa Wirkkala's ace and Megan Clark's kill off an assist from Amanda Bell. Later Clark and Wirkkala helped Ilwaco to a 3-0 run, but the Lady Rockets had a pair of 8-0 scoring binges and streaks of 3-0 and then 4-0 to end the game.

Game three Ashley Moore served four of her seven aces in the match and Micah Jenkins served six aces as Castle Rock blasted to an 8-0 lead and then rattled off 13 straight points to end the contest. And yet there were bright spots for Ilwaco. "We played them tougher this year in the first two games than we did last season," Coach Marie Green said. "We didn't give up. We were competing to the end, and we are improving."

The Lady Fishermen missed on only two serves, a season-low, while Castle Rock served out four times. Maddi Seidl, another Lady Rocket sophomore, dished out 23 assists and served seven aces in just over two games. Castle Rock is now 5-1 in the Trico after losing 3-2 to Ridgefield on Tuesday and Ilwaco is 1-5 in league play and 1-6 overall.