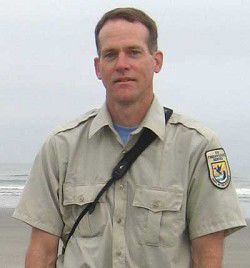 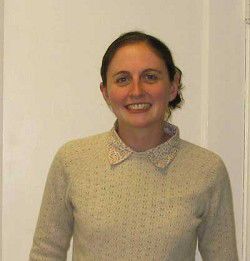 Richie worked for the Washington Department of Fish and Wildlife before coming to Willapa Refuge. His primary focus is to manage terrestrial threatened and endangered species conservation and coastal habitat management and restoration programs, including snowy plover, streaked horned lark, and native plant communities.

He is also the refuge lead on the forest habitat restoration program, a collaborative effort with The Nature Conservancy to enhance and accelerate the formation of marbled murrelet nesting habitat. An additional responsibility is to develop an Oregon silverspot butterfly conservation and habitat restoration program with the aim of future butterfly reintroduction to the Long Beach Peninsula.

"In 1990, I began work on marbled murrelet research involving marine and terrestrial surveys, conservation, and surveyor training," Richie said. "I have been involved in development of the state Forest Practice Rules requiring survey of suitable marbled murrelet nesting habitat and protection of nesting sites on non-federal lands in Washington. I designed and implemented one of the first fisheries observer programs to monitor seabird bycatch in Puget Sound salmon fisheries. My responsibilities have also included threatened and endangered avian species conservation and habitat management, coastal marine bird and mammal and waterbird surveys, colonial marine bird nesting surveys, community-level study of zooplankton in Hood Canal to examine the possible effects of hypoxia, oil spill response and oiled bird treatment, and fisheries sampling."

Richie is also responsible for surveying a Pacific coastal beach on the Olympic Peninsula as part of the COASST program based at the University of Washington.

Bergerson grew up in Philadelphia, Pa., and graduated with a bachelor of science in biology and environmental studies there. During that time, she completed internships in the science education departments of the Philadelphia Zoo and Franklin Institute Science Museum. She continued her work in science and education during a National Science Foundation GK-12 graduate fellowship at Saint Joseph's University (SJU). As a master of science graduate fellow, she completed research on the population ecology of the fruit fly and collaborated with the Wagner Free Institute of Science, a local natural history museum, to develop and implement a hands-on, place-based science curriculum to under-served youth in the Philadelphia School District.

After graduation, Bergerson worked as a conservation associate for the National Park Service at Lava Beds National Monument in northern California. While working in California, she led in the development of the Wilderness Stewardship Plan, conducted various wildlife studies, and worked as a wildland firefighter.

"Then, I returned to Philadelphia to work as the program manager for the National Science Foundation GK-12 program at SJU," Bergerson noted. "During this time, I worked with teachers, graduate students, university faculty, and museum educators to facilitate the school-university-museum partnership offering science outreach programs. I also became an active volunteer for Friends of the Wissahickon, working on the Sustainable Trails Initiative and Trail Ambassador Projects."

Bergerson added, "I am excited to have the opportunity to work with the Friends of Willapa National Wildlife Refuge, the surrounding communities, and visitors to the refuge."

Arizona DL coach Ricky Hunley on returning to UA, coaching philosophy and his time as a Wildcat