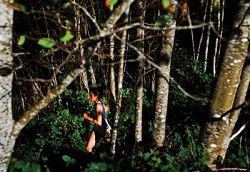 On the way to her second place finish in the girls race, Ilwaco's Cindy Pacheco traverses the wooded home course.<I><BR>DAMIAN?MULINIX/Chinook Observer</I> 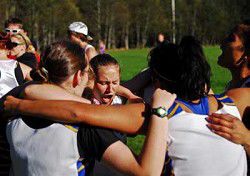 On the way to her second place finish in the girls race, Ilwaco's Cindy Pacheco traverses the wooded home course.<I><BR>DAMIAN?MULINIX/Chinook Observer</I>

The Fishermen boys finished second as their sixth place runner was nipped by Kalama's sixth place finisher in a tiebreaker. The Lady Fishermen were fourth in the five-team Trico meet. Tanner Weidner had a break out race and he finished fourth with his personal best of the year. For the girls, Cindy Pacheco was second and Leticia Cervantes sixth.

Prior to the meet the Ilwaco seniors were honored. "Owen has been a huge part of our program and will really be missed. He has competed in the Ilwaco cross country program for six years. Andy and Josh are in their first year of cross country," Taylor said.

Taylor said, "Tanner was finally able to relax and run his best race of the season. Josh really picked it up and improved for his last home race. The boys ran really well as a team. They packed up together and were able to pass a large number of runners. They stayed calm at the start and had an excellent team race. We lost the tie breaker with Kalama, but it was a great race. Brandon, Tanner, Seth, and Josh were all able to improve their times from Friday."

Coach Taylor added, "The girls ran well. It is challenging to race the same course in such a short time span. Focus can be an issue. Cindy, Leticia, Raven, and Merissa all improved their times from Friday. Cindy continues to be very impressive. Leticia and Raven have really come on strong in the last few meets. Rissa and Elli continue to meet and exceed their goals."

Taylor concluded, "The middle school runners had fun and Bailey won another race for the girls. In track last spring it nearly took a cattle prod to get her to run the warm up lap and now she is out winning cross country races. She is a great athlete and a fun kid to have around. The middle school girls love having a full team and scoring at meets."